With a tomato harvest of 6,877,400 tonnes, Italy was the largest producer of tomato in Europe in 2009, accounting for 30% of total European production, according to data from the Statistics Division of the Food and Agricultural Organization of the UN (FAOSTAT). Next in importance after Italy were Spain, Russia, Ukraine and Greece. Overall, European production of tomato increased.

Ukraine and Greece were the fourth and fifth most important European producers, respectively. Ukraine produced 2,040,800 tonnes of this crop, 37% more than in 2008. Meanwhile, Greek production of tomato totalled 1,350,000 tonnes, an increase of only 0.8% in comparison with the previous year. 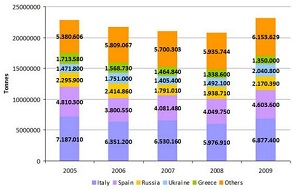 A number of European countries showed a considerable increase in their tomato production between 2005 and 2009, as the graph below shows. Bosnia and Herzegovina, Ukraine and Croatia recorded the highest increases in production: 51%, 39% and 29% respectively. At the other end of the scale, production in Slovenia, Lithuania and Latvia dropped considerably over the 5-year period. 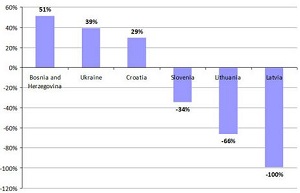