The Potato Council has produced provisional estimates of planted area for the top ten varieties grown in Great Britain. These varieties account for approximately 55% of total GB plantings.

The multi-purpose variety Maris Piper, although having slightly lower plantings than 2010, remains the dominate variety accounting for 17% of planted area. The variety is mainly used for chipping (French Fries) although, is popular for packing and the bag trade. The top five varieties ranking are slightly changed from 2010. Estima which is predominantly used for pre-pack commands the second spot, although it declined by 11% from last year, and by 50% from the 2006 area of 15,770 hectares. 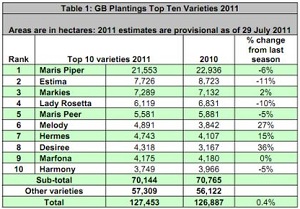 Markies mainly used for chipping (French fries), moved from 4th to 3rd place and Lady Rosetta, a crisping variety (Potato Chips) moved from 3rd to 4th place. The pre-pack variety Maris Peer mainly marketed as a salad or new potato remains in 5th place. Moving up the rankings from 9th to 6th place this year is Melody which has increased in planted area by 27%. The largest increase in area in the top 10 is the red variety Desiree mainly used for pre-pack, entering the top 10 this year in 8th place which has increased in area by 36%. Hermes maintains 7th, although with an increased area of 15%. Based on the current estimates for area and yield – 127.453 ha (+0.4%) and a yield of 46.5 ton/ha (=3 year avarage yield) – the total GB potato production estimate is 5.92 million tonnes