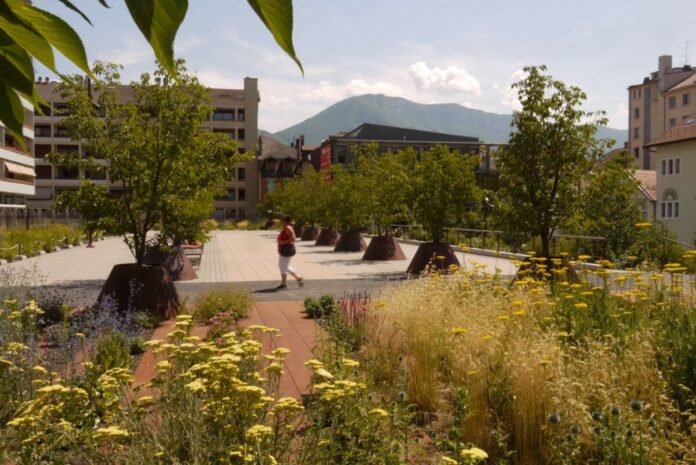 The Minister of State for Land Use and Biodiversity, Pippa Hackett joined Bord Bia and the Irish Hardy Nursery Stock Association today to launch More Green Cities for Europe, an initiative which aims to increase the proportion of green landscaping in building projects in Ireland while encouraging the use of locally-grown planting stock.

‘The pandemic has thrown into sharp focus how important it is to ensure our local areas are both habitable and sustainable. That also means supporting local growers of course so it’s good to see this campaign address these issues head on’ said Minister Hackett speaking at the launch in Dublin today (16.06.21). Supported by funding from the European Commission, More Green Cities for Europe is co-ordinated in Ireland by Bord Bia, in conjunction with the Irish Farmers Association on behalf of the Irish Hardy Nursery Stock Association.  The project runs until the end of 2023, with Ireland joining 12 other European countries, including Germany, France, Sweden and Italy.

More Green Cities for Europe aims to highlight the importance of green areas in minimising the consequences of climate change, while raising awareness of the wider benefits green space can offer for human wellbeing, biodiversity, social cohesion and the economy. The campaign is aimed at national and local decision-makers, planners, developers, architects and other sectoral professionals with a view to increasing investment in, and commitment to the greening of public urban areas. This will be achieved through the roll out of webinars, professional networking and knowledge-sharing opportunities, and third-level and sectoral engagement over the next three years.

Speaking at the launch, CEO of Bord Bia, Tara McCarthy said: “Conceived as a solution to mitigate the effects of climate change and increasing urbanisation, More Green Cities for Europe has the potential to maintain, if not improve, the quality of life in Ireland’s towns and cities. It is a timely, urgent and welcome initiative from the European Nursery Stock Association in conjunction with the European Commission. Bord Bia is ready to play its part in assisting Ireland’s amenity sector in making our towns and cities better places to live and work in, through increased green planting that is grown and sold here in Ireland.

“We all have a responsibility to try and safeguard Ireland’s natural and urban environments for future generations. To this end, I would strongly encourage all those who have a decisive role in city planning, landscape planning, and building design and construction to engage with the More Green Cities for Europe campaign to see what ideas, information and expertise it can offer to support them in this endeavour.”

Minister of State for Land Use and Biodiversity, Pippa Hackett added: “I am delighted to launch a campaign that, at its heart, aims to make our towns and cities better places in which to live, work and visit. The aims and ambitions of More Green Cities for Europe are closely aligned with the Programme for Government and our obligations under the UN Sustainable Development Goals.  I look forward to following the campaign and to it bearing fruit over the coming years.”

Chairman of the Irish Hardy Nursery Stock Association, Val Farrell said: “Supported by our partnership with the IFA, the Irish Hardy Nursery Stock Association is pleased to be involved in More Green Cities for Europe. The amenity horticulture sector is worth over €77 million to the national economy and the campaign represents a valuable opportunity to economically support local growers in rural areas. Moreover, the advantages of planners and developers using locally grown plants are many. These include reduced carbon footprint when transporting stock; access to stock that is better suited to an Irish climate; and a chance to see stock in-person, in advance of purchase. The case for greening is clear, as is the case for buying Irish.”