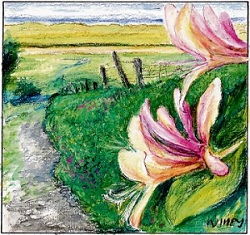 ANOTHER LIFE: ON OLD MAPS of the hillside, the boreen to the shore doesn’t get there, the dotted lines tilting down briefly to a pound for the townland’s straying animals. Yet the track must have continued even then, a stony way for cartloads of shell sand and wrack, and for driving cattle up from a salt marsh “liable to flooding”.

Source: Irish Times – Where To Look For All You Need To Know About Wild Flowers

ANOTHER LIFE: ON OLD MAPS of the hillside, the boreen to the shore doesn’t get there, the dotted lines tilting down briefly to a pound for the townland’s straying animals. Yet the track must have continued even then, a stony way for cartloads of shell sand and wrack, and for driving cattle up from a salt marsh “liable to flooding”.

The boreen was still stony three decades ago, some small promise of pristine remoteness in which to venture another life. I walk most of it now before breakfast, downhill and up, in a gesture to making life last, but the arterial creep of tarmacadam has since trickled down the whole road, ending in a tourists’ car park with summertime loo.

Where the dog and I splashed through the boreen’s ford at the mountain river, or thrillingly, in floods, waded and swam (the dog, I mean), there now is a bridge above a concrete zero, and what is left of the stream no longer appeals to dipper or sandpiper, or the sand martins that used to nest in the banks. I stop and turn before then, at the gate of the last farm.

What gets thrown out of cars for me to pick up has changed through the years: fewer cigarette packets now, or the builders’ sandwich cartons of the tiger years. Even soft-drink cans have eased, except on bank holidays, when the car park fills up. This morning, as I write, sheep that turned to gaze at me wore yellow plastic earrings – tags that made them perversely individual, as sheep, perhaps, are not supposed to be.

What ties the boreen to its past are the plants and bushes along its banks and verges: vegetation changing through the seasons but also through decades and lifetimes. Thirty-odd years ago, when wandering cattle grazed “the long acre” from dawn to dusk, today’s lush, magenta cushions of clover, the yellow margins of waist-high buttercups, would never have reached flower. The grass on the banks, left uncropped, has smothered wild thyme at the turn to the sea, and gives way in turn to new swags of bell heather.

The best stretch of the boreen was carved beside a creggan, one of a terrace of bedrock bluffs at the foot of the hillside. This is where the morning sheep pose on the skyline above me with dark, Taliban profiles and daggers for horns.

Below them a dense thicket of wind-dwarfed hazel is probably centuries old – even, conceivably, millennia, as hazel covered Ireland completely until the big trees arrived. The foothills of Mweelrea, regularly drenched in sea salt, came to sport tight-woven woods of sessile oak, holly and hazel, and shreds of this low scrub still survive wherever the rock gives shelter.

The thicket escaped the storm that stripped the last white petals from the burnet roses and scorched the farm sycamores beyond. Now it cradles a tangle of honeysuckle, pink and cream. There is plenty more along the road, swathed above banks twined with spiralling amethyst bells of vetch and the lemony curl of fresh ferns.

It has never been easier to know just enough about Ireland’s wild flowers. There are new books with great photographs, such as Declan Doogue’s The Wild Flowers of Ireland (Gill & Macmillan, €29.99), and brilliant websites full of floral chat and pictures, such as irishwildflowers.ie. And this summer will see a new version of the little hard-covered handbook that no Irish botanist, professional or amateur, would want to be without, Webb’s An Irish Flora.

First published in 1943, its initial six editions were solely the work of David Allardice Webb, longtime Trinity professor of systematic botany, and the book remained the standard field reference for more than 50 years. My copy is of the seventh edition, published with co-authors in 1996. He didn’t live to see it, having died in a car crash two years before. By Trinity’s own account, Webb was a colourful colossus, a lifelong bachelor in jeans and bright sweaters, topped by a halo of white hair. He was fun to be with, we’re told, unless one was a fool or small child, neither of whom he suffered gladly or, preferably, at all.

The eighth reworking of what will always be “Webb’s” is by Prof John Parnell, his successor at Trinity, and Dr Tom Curtis, long the leading botanist in the National Parks Wildlife Service. Its finer points, arising from advances in genetics, will engage botanical students, but the ordinary reader will use it to pin down a plant seen in the field, or to check the sort of place it likes and when it flowers. Brightened up no end from its past, rather nondescript pocketability, and with illustrations by Elaine Cullen of Trinity, it is promised in August from Cork University Press.