The production of vegetables in the Netherlands has increased over the last decade, according to the latest data published by the Statistics Division of the Food and Agriculture Organization of the UN (Faostat).

Vegetable production in the Netherlands grew 28% between 2000 and 2009, reaching a total of 4,631,437 tonnes 2 years ago. However, over this 10-year period, production figures have tended to fluctuate.

Vegetable production in the Netherlands: 2000-2009 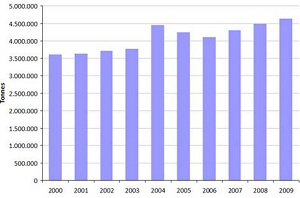 Onions are produced in greater volume than any other vegetable in the Netherlands. In 2009, they accounted for 28% of total vegetable production at 1,269,000 tonnes. Tomatoes represented 17% of total production, followed by carrots and turnips – 12% of total production. Next in importance are cucumbers and gherkins, and then green chillies and peppers, as the graph below shows.

Vegetables in the Netherlands: Share of total production in 2009 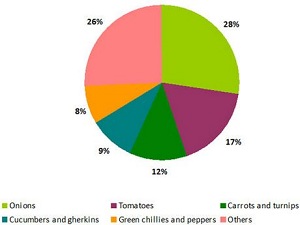