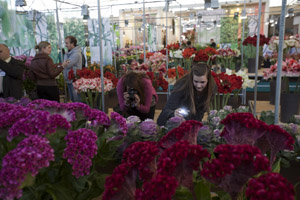 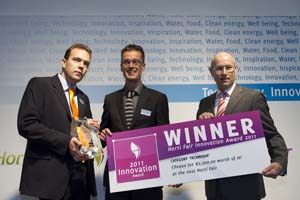 ReduFuse, a product from Mardenkro B.V., is the winner of the Horti Fair Press Award, the new award that a jury of press representatives from major horticultural titles chose as being the most striking new product exhibited at the Horti Fair. From innovations previously nominated by a jury of international experts, representatives from trade magazines Groenten & Fruit, Glastuinbouwtechniek/Sierteeltmarketing, De Bloemenkrant, KAS and Onder glas selected the winner that they thought was the most outstanding and deserving of the Press Award 2011. The press jury looked not only at each product’s innovative qualities but, perhaps even more importantly, its practical application, and presented an incentive award to HortiMaX B.V. for its IrrigatieChecker.

Jury’s report on the winner, ReduFuse ‘With its ReduFuse’, according to the jury’s report, ‘Mardenkro has a new product which is applicable throughout greenhouse horticulture: a removable coating that for all intents and purposes can be used at every business in horticulture under glass. Last year, much was said and written about diffuse glass. Research had shown that this glass generates a 7 to 10% increase in production. But the application of diffuse glass is possible only once a grower decides to build a new greenhouse or replaces the roof of his existing greenhouse. For this reason, many greenhouses with diffuse glass will be built in coming years.

This new product was the subject of much discussion at last year’s Horti Fair, but it was not yet available for commercial use. Due to its immense added value, low investment and its broad range of application, Mardenkro’s ReduFuse was the unanimous winner of the Press Award.’

Incentive award goes to HortiMaX B.V. For the incentive award, the press jury selected the IrrigatieChecker from HortiMaX B.V. This IrrigatieChecker accurately and efficiently measures the amount of irrigation applied by a reference dripper so that the grower can monitor the distribution of water in the greenhouse during each irrigation cycle and over an entire irrigation period. ‘This is a simple invention yet one with a wide range of application – something from which all substrate growers can benefit. This system eliminates the need to monitor the actual amount of irrigation with a measuring cup, bucket or beer bottle. The system is simple and inexpensive’, according to the press jury. 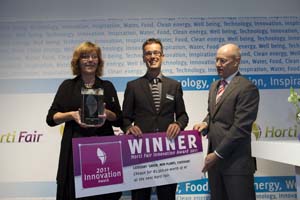 With its new product ReduFuse, Mardenkro B.V. is the winner of the Fair Innovation Award 2011 in the category dedicated to Technology. The winner of this highly prestigious award for the most promising new product at the Horti Fair in the ‘Green’ category was Corn. Bak BV with its Florinilla® ‘Bella’[p]. These announcements were made by Geert van Oosterhout, the chairman of the jury, on behalf of the international jury of experts, on the first day of the trade fair being held in the Amsterdam RAI. On behalf of the organisation, fair director Frans-Peter Dechering presented both winners with a trophy and a cheque for € 2,500 in square metres for the next Horti Fair. ‘These two winners and the other 11 nominated new products provide a good picture of the broad, innovative character of international horticulture under glass, just like the Horti Fair is a reflection of this dynamic sector.’

Jury’s report: new products with a wide range of application

‘Mardenkro B.V has succeeded twice in developing a new product with a wide range of application’, said Mr Van Oosterhout, the chairman of the jury. ‘This product, ReduFuse, responds to the findings of recent research that has shown that the use of diffuse glass generates a dramatic increase in production for various crops. Applying ReduFuse to the roof of an existing greenhouse means a limited loss of light that is more than compensated for by the agent that diffuses the light. It can be used for a wide range of crops, retains its light-diffusing property for a longer time, and can be removed by simple means in the autumn. It thus requires only a small investment that is quickly recouped.’

The jury had this to say about the winner of the Green category: ‘With this Florinilla® ‘Bella’[p], Corn. Bak B.V. has succeeded in developing a very compact and sturdy form of the beautiful Medinilla. The plant produces a profuse number of fine, bright pink inflorescences and can be supplied year round. This makes a wonderful addition to the line of flowering houseplants.’ The Innovation Award is the most important element in Horti Fair’s innovation programme and will be awarded annually to the most promising new product introduced at the Horti Fair.

The jury evaluated almost 100 new products this year (20% more than last year) and selected the winners from among 13 that were nominated. The new products usually involved technological solutions and simple principles with a wide range of application and that focused on the Cultivation New Style, energy, quality and cost saving, and less focused on marketing and sales concepts.

The other 9 nominated new products in the Technology category:

Gavita Nederland B.V. (stand 11.0106) – Gavita GAN 300 LEP
This first plasma luminaire based on LUXIM solid state plasma technology with a CRI of 94, is suitable for daylight simulations and supplementary lighting due to its completely sealed housing, lack of moving parts, and long life span.
Jury: a solution for assimilation lighting at very high light intensities such as in climate rooms.

Horticoop (stand 11.0506) – Easy Ice Clean
The Easy Ice Clean reduces labour costs. It moves alogn the existing tubular rail installation, cleans reflector caps and light sources rapidly, inexpensively and effectively because they do not have to be removed and can be used again immediately after cleaning.
Jury: a practical innovation for maintenance work that is required at an increasing number of companies.

HortiMaX B.V. (stand 11.0108) – HortiMax IrrigatieChecker
This IrrigatieChecker accurately and efficiently measures the amount of irrigation applied by a reference dripper so that the grower can monitor the distribution of water in the greenhouse during each irrigation cycle and over the entire irrigation period.
Jury: an innovation that will aid many greenhouse horticulture companies that use substrate cultivation with drippers. Will have to prove its reliability in practice, if it is to turn out to be a true innovation.

Klimrek (stand 09.0407) – Anticondensation treatment unit for glass
Anti-condensation treatment of the greenhouse roof with this truss carrier fitted with spray heads produces between 6 and 9% light gain and energy savings of 11%.
Jury: An enormous potential for savings by means of a relatively simple invention. Just like other inventions from Klimrek, this is based entirely on the use of U-shaped sections for (automated) operations at right angles to the roof bays at the top of the greenhouse.

KUBO Tuinbouwprojecten B.V. (stand 11.0202) – The Ultra Clima® double air hose
This double air hose evenly distributes temperature both horizontally and vertically and thus provides better airflow with less energy consumption.
Jury: an innovation that makes use of a proven, simple, but effective counterflow system and has the potential to achieve a breakthrough in Cultivation New Style.

Maurice Kassenbouw B.V. (stand 11.0412) – Air & Energy KasTM
A greenhouse with a ventilation system for controlling moisture balance by means of separate systems for the supply of fresh dry air and recirculation. Since the system is equipped with heat recovery air exchangers, no heat supply is required so that when ventilation is used, no loss of energy occurs. The results are a lower investment and operating costs.
Jury: the dehumidification of greenhouse air demands the most efficient possible application of energy. The way in which this innovation uses relatively dry outside air contributes to the lowest possible consumption of energy for this process.

Penn-Textile Solutions (stand 08.0429) – OMBRA-DLS
OMBRA Dynamic Light Management Solutions manages dynamic shadow in a range of 8% to 65% light ingress in the greenhouse. The thermal resistance of the cloth enables energy saving and shadow management with a single screen instead of several.
Jury: a stretch screen that regulates light transmission by rolling-up. Innovative, but the long-term effect still has to be demonstrated.

Van der Ende Groep (stand 11.0308) – Precision-Spray
Mounted on a sorter, this system applies crop protection substances to flower buds very precisely and efficiently, by spraying a mixture of crop protector and air from three directions. Only a minimum quantity of the substance is needed, because the dose for each nozzle and batch is easily adjusted.
Jury: enables pinpointed post-harvest treatment of flowers to prevent Botrytis during the sales phase. Could possibly be extended to include the addition of fragrances…

In the category for ‘Green, new plants, cultivars’, the other 3 nominees were:

Corn. Bak B.V. (stand 10.0303) – Vriesea ‘Vision’[p]
An easily grown plant that is suitable for the 12 cm pot and has a striking appearance due to its bright yellow inflorescence that contrasts beautifully with the red stem.
Jury: beautiful branching inflorescence, a rich addition to the range.