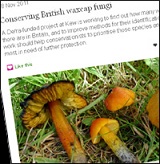 A Defra funded project at Kew Botanic Gardens called the Waxtongue is carrying out phylogenetic research on some fungi, namely waxcaps and earthtongues to find out how many and what types are established in Britain.

The waxcaps are unusual enough to be a factor in classifying a Site of Special Scientific Interest(SSSI). If there are 18 waxcap species at a particular site it is considered for SSSI status.

In 2007 the pink waxcap, the Hygrocybe calyptriformis, was, for example, registered as vulnerable on the UK BAP priority list.

Finally, today the number of these fungi and where they are, has become a recognised part of the UK’s conservation strategies. According to Kew, data is being actively recorded by local groups in a UK network.

There are a few reasons why the number of waxcaps and the range of species are unclear. For one thing, Waxcaps are particularly difficult to differentiate between because of their range of colours and variety of forms.

The idea with this project being run in association with Kew, Aberystwyth University, The Mycological Society and Natural England, is that by DNA testing these fungi, the different species can be identified.

In the past the waxcaps were morphologically defined, that is by their structure and colour but by using DNA testing more types are being discovered.

Another scope for the research is to find out if, beneath the ground, the fungus has a symbiotic relationship with living roots and if so, with which plants.

An expert in this field is Dr Martyn Ainsworth a senior Kew mycologist and team member for the Waxtongue project. He told the BBC that basic questions need answering.

“How many wax-caps are there and what are they living on?,” Dr Martyn Ainsworth said.

“They are so fundamentally important to our life support system, I mean it does not get more basic than that. We finally have the tools here so we can accurately diagnose the number of species we have at a much faster rate than before.” Which makes it, Dr Ainsworth said, ‘an exciting time to be a mycologist’.

Yet there are other reasons apart from developments in technology, why the range and needs of the fungi have remained unknown. One being that they are the forgotten part of the mushroom kingdom.

Today, even the bugs that feast on decomposing wood are recognised in ecosystems. Yet fungi, unlike worms and insects, has been the unwanted friend in the ecosystem.

As another sponsor of the project, the British Mycological Society put it.

“There is still one major hurdle to clear. It would help the cause of their conservation if fungi produced the same responses in the general public as orchids, butterflies, birds or red squirrels. We want to remove the ‘ugh’ factor and replace it with the ‘ah’ factor. “

Kew are the most qualified organisation to ensure that the Waxtongue project is completed accurately. They house the Mcycological Herbarium with over 800,000 mostly dried specimens from across the globe.

The discoveries that the project uncovers about the varying species and their habitats will be essential for feeding into conservation schemes.