Cygnet PB Ltd is predicting that next year, Casablanca, their new first early potato variety, is going to be one of the most sought after varieties for growers and the food industry. 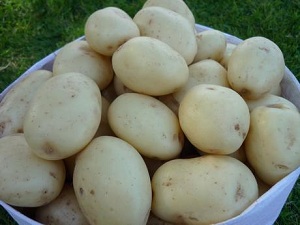 Casablanca has certainly had a great start. In 2011, its first year of commercial availability, the variety is already appearing on the shelves of most major retailers and has been approved for use by multinational processors, as well as in the fish and chip trade. Its taste, texture and yield ability set it apart from other first early varieties and in taste assessments held by processors and retailers alike, it has scored consistently well.

To back up the claims, independent research – carried out by the Flavour Centre at Reading University as part of Cygnet PB’s breeding and development program – shows that Casablanca has high concentrations of key flavour-forming amino acids, which contribute to the overall flavour of this outstanding variety.

With its relatively high dry matter for an early variety, Casablanca is suitable for both the processing and fresh markets, as its listings confirm, and is being sold as a washed and pre-pack new potato as well as a set skin white / baker. Its fry colour is superb and is being used successfully in the UK and on the continent as a great chipping variety.

With Casablanca’s taste profile and performance and versatility across both fresh and processed markets, Cygnet are confident that this variety will continue to flourish in 2012 and beyond.