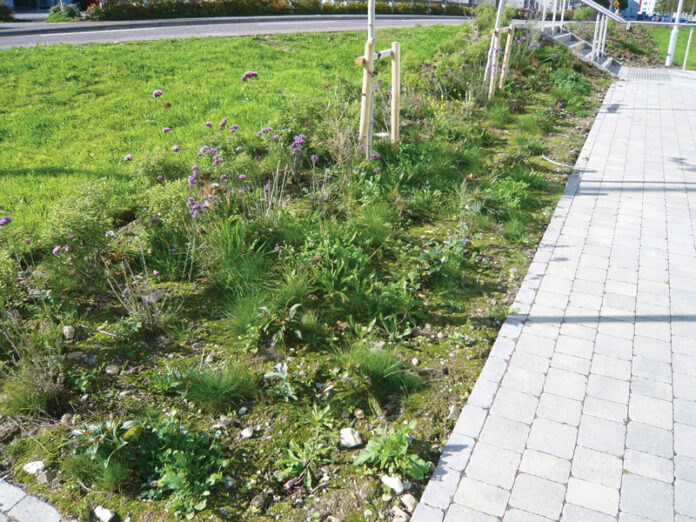 To implement policy changes and objectives concerning the management, protection and planning of the landscape, we need to get the basics right, argues Terry O’Regan

There are many ‘Covid 19’ lessons we might usefully take on board as we face other daunting challenges – such as global warming/climate change – if we have the requisite wisdom, will and leadership and bear in mind the equal importance of the little picture versus the big picture and how people can suddenly depend on their local landscape.

Responding to Covid 19 required individuals, communities, local/state authorities and international bodies to act in unison, in accordance with agreed regulations and rules. Such good governance does not come easy, as I have learned over a lifetime in the Irish landscape sector.

When I first proposed a national landscape policy 30 years ago, I wasn’t thinking about the bigger picture, rather about little pictures, like the (pictured) sorry examples of Irish landscaping craft. These are not photographs taken 30 years ago. They are recently completed projects on the outskirts of Cork City.

Maybe it’s only an old landscape professional like me that recoils from the sight. I hope that it is the exception and whilst I cringe when I see landscaping of this standard; I rejoice when I see high-quality work and there are many examples of that around today.

There are many reasons why a fine building project ends up looking like this. It may have been a ‘design and build’ project or an e-tenders misfire. The specification may have been loose or almost non-existent. There may have been no professional supervision. The price agreed may have been too low. I realise that the landscape contractor is the last man/woman standing and may have been presented with shallow, stony, so-called ‘topsoil’ spread over compacted subsoil.

The profession/sector has tried to raise standards over the years. The Association of Landscape Contractors of Ireland (ALCI) in its earliest days worked on an agreed specification with landscape architects and published a document around the 1970s. Many landscape architects strive to apply British Standards to projects, but they were often stymied by being engaged for the design and specification stage, but not given a project supervisory role.

In the 1980s, I thought the UK Garden Festival concept might be usefully adapted for Ireland as a means of raising standards and the profile of the sector. I even brought one of the designers of the early festivals over to Malahide to deliver a presentation.

In the 1990s I thought a National Landscape Policy just might drive awareness of the importance of the sector and generate the resources to provide regulation and policing. As we now know to our cost, regulation/policing had gone out of favour, resulting in uninhabitable new apartments, with new houses and schools falling apart and more besides.

There have been other initiatives. The ALCI has an annual awards scheme highlighting the very best that the industry can deliver. The Irish Landscape Institute also has an awards scheme achieving a similar outcome. The very successful Bord Bia ‘Bloom’ event has contributed hugely to the public awareness of quality design and construction. Bord Glas/Bia made other important contributions over the years most notably their Quality Awards Scheme.

But are we still letting poor-quality work and unviable low prices drag the sector down to the lowest common denominator?

Individually, there are limited options available to contractors and consultants. Contractors might identify building contractors with whom they were not prepared to work, or not respond to their tender enquiries or pricing. Consultants might try to be selective with regards to the contractors on the tender list and have a rigorous snagging approach – easier said than done! The relatively recent public procurement process has not helped. There is an urgent need for that whole process to be reviewed and reconsidered. It may seem to deliver the lowest tender, but does it deliver value for money in the final analysis?

The bigger picture – at state and European level – is not encouraging either. Yes, the call for a National Landscape Policy in 1995 and the opening of the European Landscape Convention for signing/ratification in 2000 did finally result in an Irish strategy document in 2015. But to all intents and purposes the engine of the National Landscape Strategy (NLS) faltered and died in 2018.

Through Landscape Alliance Ireland I have been writing to Malcolm Noonan, Minister for State at the Department for Housing, Local Government & Heritage, who has responsibility for implementing the NLS, urging him to ‘push-start’ the stalled strategy. This year, I wrote in May and the reply in October informed me that “the department [Housing, Local Government & Heritage] is carrying out a workforce planning exercise and a proposal has been submitted for increased staffing resources to deliver this [NLS] strategy and related priorities.’

A cabinet-approved national strategy prepared over many years involving active input from the voluntary sector and two public consultation exercises is akin to a ‘good governance contract’ with the citizens of the state. Further, the state entered into a ‘moral contract’ with fellow members of the Council of Europe in 2002, when it signed and ratified the European Landscape Convention.

When it launched the National Landscape Strategy 2015-2025, the state was obligated to concurrently put in place the requisite resources to ensure consistent, on-time implementation.

I acknowledge the minister also noted that “ongoing work led by the Environmental Protection Agency to carry out pilot landscape character assessments and carry out a literature review to inform the development of a Landscape Character Assessment Toolkit for use by local authorities.” This is to be welcomed even if it is but one piece of the comprehensive NLS/ELC (European Landscape Convention) integrated jigsaw.

As I write, the COP 27 environmental conference is taking place in Egypt. This is very much about that bigger picture and the depressing newsfeed emerging from same demonstrates that the challenges we face in Ireland with regard to good governance are universal and daunting.

You have to ask (in the late Dermot Morgan sermon-style), “Isn’t it time for less cop-out and more cop-on!”

We may not have tropical rain forests in Ireland, though you might think otherwise this autumn/winter; but every green space we design/create counts – it is incumbent on us to ensure that they are not alone fit for human recreation, but also that the plants are sufficiently healthy and resourced with an appropriate root-growth zone to make a local contribution to global warming reduction over their lifetime.

The Rio environmental conference in the 1990s urged us to think global, but act local. The hungry, stony subsoil of my Cork site is as local as it gets for action. If we want every project to come with quality landscaping and healthy thriving trees, we simply have got to get the basics right.

Liam Griffin, in a radio interview after he guided Wexford to All-Ireland glory in 1996, when asked about his secret for success, remarked that “the only man who knows where he’s going is the man pushing the wheelbarrow” – there is a depth of wisdom in that observation. There are many wheelbarrows laden with strategies, policies, plans, promises and unwritten landscaping regulations parked in our departmental corridors, but we urgently need more barrow-pushers!. ✽