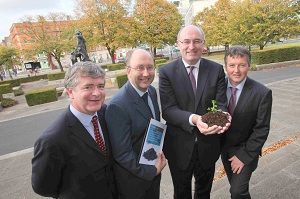 This Irish Standard is designed to promote the development of the composting industry and to create markets for compost as well as providing purchasing guidance for consumers and businesses. I.S. 441 is a joint initiative between the Department of the Environment, Community and Local Government, NSAI (National Standards Authority of Ireland) and rx3 under the Department’s Market Development Programme.

Composting and anaerobic digestion facilities in Ireland employ 363 people in 2011, with a greater number indirectly employed. According to InterTradeIreland, the sector has the potential to employ up to 1,450 people directly. I.S. 441 will support employment creation by enabling composting facilities to generate increased revenue for high quality compost.

Launching the new standard, the Minister said that “I.S. 441 defines a high quality standard for Irish compost and will instil confidence and provide certainty for consumers who will now know of the quality and contents of the Irish product, when they are choosing which compost to buy, The value of the compost market in Ireland has the potential to grow significantly where compost consumers buy high-quality compost product”.

Diverting organic waste from landfill will contribute towards the achievement of EU Landfill Directive targets by Ireland. I.S. 441 will support this priority action by helping to ensure that there are outlets, including high value markets, for compost products made from the diverted materials.

As part of the development of CQAS 441:2011, a trialling and facility audit phase is ongoing at fifteen composting facilities. A second phase involving a full scale operational pilot phase will follow shortly, prior to the scheme launch and then operating on a self-sustaining basis. The Minister is confident that the combination of I.S. 441 and CQAS 441:2011 will further develop the market for Irish compost products and that the development of an identifiable brand will facilitate easy identification of a quality assured compost product.

Maurice Buckley, CEO, NSAI, speaking on the launch of IS 441, said, “The launch of this new Irish Standard I.S. 441, developed by a Working Group established under NSAI’s Environmental Standards Consultative Committee, will help stimulate markets for compost-based products. The need for compost quality standards is a natural outcome of the growth of the compost industry. This standard looks at limits for heavy metals, impurities, stability, organic matter and pathogens, all areas of focus of an increasingly environmentally aware public, as well as with health regulators and traditional agricultural associations. The combined presence of an Irish Standard. 441 and a National Compost Quality Assurance Scheme (CQAS 441:2011) will help to further develop the market for these natural fertiliser products.”

Copies of I.S. 441 are available to purchase online from NSAI through www.standards.ie, email info@standards.ie or phone 01 875 6730.

rx3 is a Department of the Environment, Community & Local Government initiative, tasked with project managing the key objectives and deliverables of the Market Development Programme for Waste Resources 2007 – 2011. rx3 will identify new opportunities for waste materials and stimulate business ideas and facilitate businesses by providing advice and support for the sector. Full details at www.rx3.ie