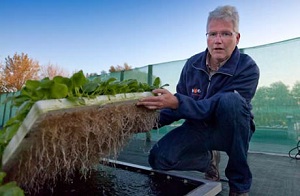 At Proeftuin Zwaagdijk research has been ongoing since 2007 on open air hydro cultivation. Researcher Matthijs Blind was involved from the start and is becoming more and more convinced that the system is the future for leaf plants. The question remains, however, how this will develop.

At Proeftuin Zwaagdijk research has been ongoing since 2007 on open air hydro cultivation. Researcher Matthijs Blind was involved from the start and is becoming more and more convinced that the system is the future for leaf plants. The question remains, however, how this will develop.

One of the most important arguments for cultivation on water is the sustainable use of water and feeding stuff; there is no or hardly any emission. Also the advantages are numerous in the economic aspect of the company, Blind tells. “In any case with this system it is possible to cultivate more intensively and as a result use the soil in a more efficient way. In addition crop rotation is no longer required and cultivation in a salty environment is a possibility. Furthermore the production and quality are reliable, as became clear during the past wet summer. Field growers not only had to face lower yields and loss of quality, but also a dirty product – because of soil splashes – and land which was difficult to access. In a situation like this hydro-culture has extra advantages.

Most of the tests being run in Zwaagdijk at the moment are part of a 5-year research project ‘Cultivation from the soil’. In this project assisted by the Ministry of EL&I and the Productschap Tuinbouw the Proeftuin Zwaagdijk and WUR/PPO cooperate in the development of alternative cultivation systems for a large number of open ground cultivations. The tests in Zwaagdijk started with lettuce, but were extended to include plants like cauliflower, spinach and wild rucola. The floating system (see photograph) appears to have the better possibilities for outside cultivation for the time being, Blind tells. “The gutter system is a little more vulnerable, when the pump does not work as it should or with an obstruction in the supply tube a shortage of water is an almost immediate result. In a floating system the plant always has sufficient water and the risk of drying up is almost nil. In addition a floating system in an outside cultivation is easier and cheaper to construct, which leads to an important saving of labour.”

Although, Blind therefore thinks that the floating system will win over the outside cultivation much is still to be researched. For instance in small trial basins (2 x 3,65 metre) the influence of EC and temperature are measured, but also if there is a maximum to the re-use of water. “Also we research how far the cultivation period can be extended. We therefore look at the possibilities of winter cultivation: to plant before the winter and to harvest in early spring. A challenge remains in further reducing the emissions.” Without any counter measures the annual emission surplus in the Netherlands will regularly cause overflowing cultivation basins and consequently leaking of fertilizer from the system. There are still more short comments. Weed killers have been allowed for instance, for open ground cultivation, but can and are we allowed to use these for hydro-cultivation and is there an increased risk of residue?”

In short, much is still to be researched during the coming months. A covering project is already looking at how the consumer will react to the influence on the environment. The developments are going quickly, the first large scale practical test has already started. “For us the challenge is to learn as much as possible and to signal problems timely” Blind concludes. “In order that the growers will be able to make the change to practice cultivation with as few problems as possible.”

Source: Fresh Plaza – Leafy Plants in the Future Only From Hydro-Culture