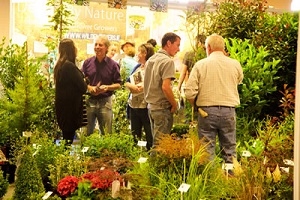 Following a detailed review of the Kildare Show (the horticulture trade event organised since 1985 by Kildare Growers), GLAS was developed by Kildare Growers with input and support from Bord Bia and organised by Mediateam on their behalf. GLAS showcased the best of Irish horticulture, attracting quality trade buyers to this key new event in the industry calendar.

Shane McEntee TD, Minister of State at the Department of Agriculture, Food and the Marine attended and complimented all those involved in organising the inaugural show. He saw it “as a good example of what can be achieved by a group of people within an industry coming together with a common purpose”. Acknowledging the difficulties experienced by the amenity sector over recent years, the Minister stated, “While the horticulture amenity sector has experienced a number of difficult years it has great potential to develop if growers come together to exploit the opportunities that exist to reduce input costs and promote co-ordinated marketing of plants.”

The Irish horticulture amenity sector has been confronted by many challenges in recent years through a combination of the economic downturn and adverse weather conditions. However, many producers have re-aligned their production to reflect their changed circumstances and this appears to be reflected in spring and summer sales figures, especially in the area of garden plant sales to date in 2011 which have been particularly strong especially for those supplying garden plants. There is a new air of enthusiasm in the industry. Market conditions continue to be challenging, but the mood at GLAS was optimistic and enthusiastic about emerging opportunities.

A survey conducted amongst the 800 visitors to the one day event confirmed that 94% of them considered their visit as ‘worthwhile’ and 82% planned to spend with an exhibitor as a result of their visit. While a separate survey conducted amongst the 75 participating exhibitor companies confirmed that 100% of them considered their involvement in GLAS as ‘worthwhile’