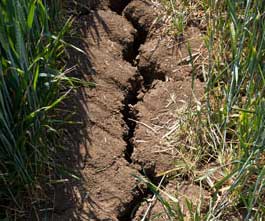 By Philip Case – Farmers must do their bit to tackle drought. Farmers will be encouraged to set up water abstractor groups and consider on-farm water storage to mitigate drought conditions, DEFRA has said.

By Philip Case – Farmers must do their bit to tackle drought. Farmers will be encouraged to set up water abstractor groups and consider on-farm water storage to mitigate drought conditions, DEFRA has said.

The steps are part of a raft of new proposals that were agreed at an emergency meeting chaired by DEFRA secretary Caroline Spelman recently.

Large parts of the UK have been affected by droughts for many months and prolonged periods of heavy rainfall in the near future are unlikely according to the Met Office.

Therefore, Ms Spelman urged water companies, businesses, and the public to find ways of reducing water waste and water usage – on the same day that DEFRA announced that the south east was now officially in drought.

“Ensuring we have enough water this summer is vitally important, and that is why I called the summit today,” said Ms Spelman, speaking after the summit, held at DEFRA’s London offices.

“Drought is already an issue this year with the South East, Anglia and other parts of the UK now officially in drought, and more areas are likely to be affected as we continue to experience a prolonged period of very low rainfall.

“It is not just the responsibility of Government, water companies and businesses to act against drought. We are asking for the help of everyone by urging them to use less water and to start now.”

The meeting brought together key players in the water industry to discuss what is already being done to tackle drought and to decide upon actions that need to be taken to mitigate against its impact in the future.

At the summit, the Environment Agency presented an in depth analysis of the drought situation and the subsequent effects on the environment.

This then led to a discussion on actions that must be implemented to act against the environmental bearing of such dry conditions.

The Environment Agency’s national and local drought teams will continue to lead on managing and monitoring drought and its effects locally.

The agency has agreed to keep farmers up-to-date about the local risk of drought restrictions next spring and summer to try and avoid irrigation bans. It will also issue warnings and advice on the prospects for spray irrigation.

The agency has agreed to prepare more detailed action plans in consultation with others for 2012 if the dry weather continues.

It will determine water company drought permits and support the government on drought orders where required.

Looking ahead, to 2013 and the possible implications and actions of a third dry winter in drought-affected areas; agency officials will “check abstractors are complying with conditions on their abstraction licences and take enforcement action against those who don’t”.

At the meeting, leading figures from water companies in areas at high risk of drought agreed to reduce water losses and increase leakage detection and encourage customers to use water wisely.

More significantly, water companies warned they could co-ordinate temporary restrictions on water use, such as hosepipe bans, from early spring where necessary.

In addition, water companies have agreed to talk to the Environment Agency about asking businesses to file for Drought Orders and Drought Permits as early as possible. Hosepipe bans are the most widely known of these restrictions.

In early March the Environment Agency will publish its latest drought prospects report, which sets out the areas that are likely to be affected by drought in spring and summer 2012.

The report aims to help water companies, farmers and other water abstractors plan for the year ahead, and sets out clear actions these groups should take to help manage the country’s valuable water supplies.

Source: By Philip Case, Farmers Weekly – Farmers Must do Their bit to Tackle Drought