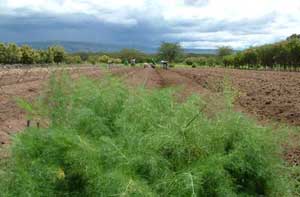 Globally speaking, the yield from crops from organic farming is on average twenty percent lower than from crops grown according to conventional farming methods. This is the finding of a so-called meta-study carried out by researchers at Wageningen University, part of Wageningen UR.

Globally speaking, the yield from crops from organic farming is on average twenty percent lower than from crops grown according to conventional farming methods. This is the finding of a so-called meta-study carried out by researchers at Wageningen University, part of Wageningen UR.

The study involved comparing 362 pieces of scientific research published over the past 25 years to ascertain the yield gap between organic and conventional crops. The researchers stress that the study in no way forms a basis for arguments for or against organic or conventional farming, as differences in the burden on the environment, for example, were not taken into account.

Over the last few years, various studies have been carried out to compare yields from organic farming with those from conventional farming. The findings varied greatly with yields in the organic farming sector of 50 percent lower to 20 percent higher. The meta-study, which was published in this month’s Agricultural Systems, is the first large-scale study to use only data of the highest quality.

All the relevant literature databases compiled over the past 25 years threw up more than a thousand scientific publications. After thorough screening for data quality, 362 crop yield comparisons in organic and conventional farming remained. The data covered 68 different crops and came from 43 different countries. This comprehensive research shows that when compared with conventional farming, current crop yield from organic farming, for which the criteria include not using artificial fertilisers or synthetic crop protection agents, are on average 20 percent lower. In countries where conventional agriculture is well-developed, such as the Netherlands and Denmark, this figure is higher, i.e. 26 percent.

Proviso
However, in the light of social and scientific debate about the part played by both types of farming in global food issues, the researchers make a number of comments regarding the significance of the findings. The gap noted applies solely to the so-called crop level. The researchers suspect that the gap in yield could be higher than twenty per cent at farm, regional and global level. Their arguments are based on the fact that in organic farming, plants nutrients are largely dependent on animal manure and the planting of leguminosae, which are sometimes rotated with grain crops as a means of green manure, and therefore do not contribute directly to food production.

Another important proviso is the dire lack of reliable data from developing countries, which are the very areas with low soil fertility and high disease and pest pressure. The extent of intensity in conventional farming possibly partly explains the regional differences in yield gap found. In addition, some crops are not as suited to organic farming techniques as others: the researchers discovered that tuberous and root vegetable crops, including potatoes, show a larger gap between the two methods, while pulses, including soya, feature a smaller gap.

Good reasons
The researchers think that irrespective of the size of the gap in yield, there can still be good reasons for choosing organic farming. These may include reducing the burden on the local environment, the exhaustibility of natural resources and biodiversity, but also ethical reasons relating to animal welfare and genetically modified organisms. Another reason could be the relative scarcity or affordability of artificial fertilisers and crop protection agents. Organic agriculture can also be valuable as an experimental site for testing more sustainable conventional farming techniques.

The conventional agriculture sector will have to become more efficient and cleaner, and in this respect, has a lot to learn from farming on the cutting edge: with little or no synthetic crop protection agents, such as in organic farming, or with a lot of organic fertilisers. However on the basis of these results, the researchers conclude that if organic farming methods are used, more land is needed to produce the same amount of food.