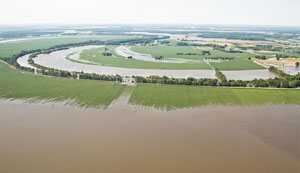 While the topic of climate change in this country often feels like the truth that dare not speak its name, there is no escaping what Grist’s own David Roberts refers to as its “brutal logic.” The planet will warm no matter how international climate negotiations — the latest round having just occurred in Durban, South Africa — play out.

While the topic of climate change in this country often feels like the truth that dare not speak its name, there is no escaping what Grist’s own David Roberts refers to as its “brutal logic.” The planet will warm no matter how international climate negotiations — the latest round having just occurred in Durban, South Africa — play out.

It’s because of that inevitable warming that Britain’s chief scientist, John Beddington, along with an international group of scientists, have taken to the pages of Science magazine this month to ask climate negotiators to stop ignoring agriculture.

Agriculture has been hovering just on the margins of climate change policy. Of course, that’s no coincidence. Precise measurement of the climate impact of many industrial farming practices remains difficult and controversial, and the U.S. in particular has resisted any attempts to formalize the agricultural sector’s obligation to climate mitigation.

The reasons for this are twofold: Big and Ag. After all, it was American agribusiness that exacted virtual exemption from the Obama administration’s failed attempt at a climate bill as a price for its potential support. The EPA continues to develop its carbon emissions tracking plan, but the agricultural sector has managed to keep itself out of that, too.

Of course, all the lobbying in the world won’t exempt actual farming from the effects of climate change. For example, there is strong science linking the massive Midwestern floods last spring and summer to the changing climate — the idea being that as temperatures rise, the atmosphere is able to hold more moisture, which it then dumps as increasingly larger amounts of rain.

And now a new report from the Environmental Defense Fund and Duke University suggests another pernicious climate effect on agriculture, in this case in California. As the western climate warms, the state’s prodigious grasslands will shrink. And with them, so will the herds of grass-fed cattle.

The study’s authors predict one of two different climate change scenarios for California: a warm-wet scenario for the region in which grasslands will be replaced with shrublands, or an arid scenario which will cause desertification on current pastureland. In either case, the result is less grass. And, it should be pointed out, less grass-fed beef.

Meanwhile Big Ag’s answer to the challenges agriculture faces remains more of the same. In the Midwest that means turning to techniques such as “tile drainage.” This practice involves burying drainage pipes under fields to keep the ground from getting too saturated after increased rainfall.

But as scientists Mark David and Eric Davidson explain, tile drainage use in the Midwest increases synthetic nitrogen fertilizer runoff into the Mississippi River and ultimately into the Gulf of Mexico. And some of this excess nitrogen fertilizer — exactly how much is unknown — ends up in the atmosphere as nitrous oxide, a greenhouse gas 300 times more potent than carbon dioxide.

And yet climate treaties give agriculture a pass.

Source: organicconnectmag – Why Is the World Ignoring Big Agriculture’s Effects on Climate Change?