More than 10,000 visitors attended this year’s FloraHolland Trade Fair. The Aalsmeer-based international trade fair, which is all about networking, gaining inspiration and preparing orders, generated a positive mood among both standholders and visitors, as well as – noticeably – major interest form abroad.

During a special ‘100 years of FloraHolland’ meeting held on the first day of the event, the Queen’s Commissioner in the Province of North Holland, Johan Remkes, officially announced that FloraHolland had been awarded the Royal designation. 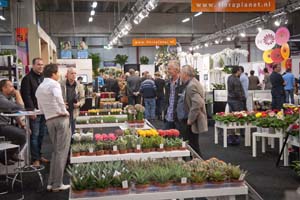 Visitors to the FloraHolland Trade Fair Aalsmeer were thoroughly inspired by the many new products, trends, innovations and the vast supply of plants and flowers. The FloraHolland Trends and Concepts Plaza was well attended by both buyers and their clients. The concepts on show were translated into practical applications for display in the stores by means of segment presentations. All in all, the fair’s 18.000m2 of floor space accommodated more that 650 growers’ stands, which were easy to locate thanks to a specially developed – and much-used – Trade Fair App. Janneke van Steijn of J.M. van Steijn & Zn., who attended the Trade Fair Aalsmeer for the tenth year running, said: “Many of our clients dropped by and we may receive some new orders. Personal contact at the Trade Fair, with end customers as well, is invaluable.”

FloraHolland introduced a new prize at this year’s Trade Fair Aalsmeer: the Best Stand Award. The factors that were taken into account were styling, message, product use, innovation, stand crew, layout and traffic. Stolk Brothers won the award, which was presented by jury chairman Marc Eijsackers at the well-attended Trade Fair Café.

The next international trade fair will be the FloraHolland Trade Fair Naaldwijk, from 14 through 16 March 2011. It is possible to register for Naaldwijk already.