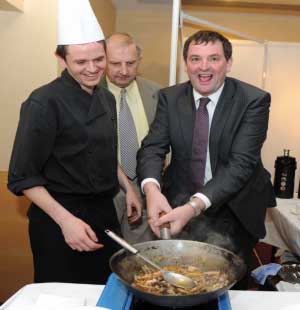 At the 2011 All Ireland Mushroom Conference and Trade Show in Monaghan, the Minister of State at the Department of Agriculture, Food and the Marine, Shane McEntee TD said: “The mushroom Industry is one of the success stories of Irish agriculture over the past 30 years”.

The conference is a cross border event with speakers and visitors from both Ireland and the North as well as further afield. Gerry Laverty, Permanent Secretary at the Department of Agriculture and Rural Development, in Northern Ireland also spoke.

Minister McEntee also said “There is general agreement on the importance of agriculture and the agri-food sector locally, nationally and internationally.  I am optimistic that this vitally important, indigenous sector can help lead Ireland’s economic recovery.  The mushroom sector has always been market led and has shown that it can survive even in challenging circumstances because it is open to innovation and quick to adopt technical developments as they arise”.

The Government has allocated €1million to investments under the National Development Plan, underlining its commitment to the mushroom industry.

Source: Department of Agriculture, Food and the Marine – The Mushroom Industry is One of the Success Stories of Irish Agriculture Over the Past 30 Year