Container Centralen met for the first time recently with a range of companies active in the horticultural industry in a new initiative called ‘The International Project Group’. Despite the groups’ wide-ranging areas of expertise, Container Centralen experienced that all members participated in an open exchange of ideas, opinions and suggestions on how to pursue the group’s common aim – how to further develop the CC Container and CC Pool System. 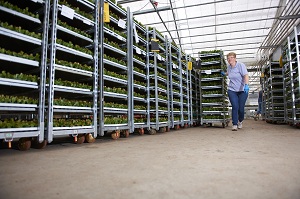 On the first out of four meetings, The International Project Group, met for a day of information- and idea sharing. All participants were enthusiastic about the project, which was established to explore issues relating to the CC Container and associated CC Pool System. As a joint asset, all parties were very keen on ascertaining how best to strengthen and develop the system to secure it for the future.

During the discussions it became clear that all areas of the horticultural sector appreciated and saw a major advantage in having one shared system for display and transportation of potted plants in Europe.

Tonny Vangsgaard Gravesen, CEO of Container Centralen, in that connection noted that: “The CC Pool is built up and owned by the 22,000 CC Container customers, therefore they should also have a say in the future development of the CC Container, as well as the supporting CC Pool System.”

It was apparent from the group’s discussions that there was a general consensus that the CC Pool System is considered a system worth maintaining and protecting as it brings great value to all users across the industry. Even so, there is also room for improvement on many points. Suggested improvements ranged from transparency in CC facts and figures, over communication about the benefits of a closed pool and the new noise-reduced products, to equipment improvements, procedural changes, technology improvements and greater insight in general.

“The day was very successful and I was pleased to see such a significant support and interest level for this project. The fact that the participants are willing to spend time travelling and disrupt their work schedules to come here, tells me that we all have a genuine interest in strengthening the pool system.

With a group comprising of growers, auctions houses, wholesalers, exporters and transporters making very valuable contributions, I am certainly looking forward to the first result, which will be a plan for how best to develop the CC Container and the CC Pool System over the next 5-10 years”, Tonny V. Gravesen concluded.

The International Project Group touched upon many issues that could be considered for future development. The main focus points for future discussion are outlined below:

With one shared view of the importance of the CC Container and CC Pool System, the International Project Group is committed to supporting one unified European system. The understanding shared by the participants is that through a real sense of ownership and user involvement the CC Pool System can become even more efficient and thereby further trading relations between an increased number of users.