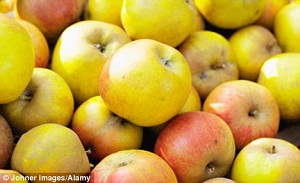 Apples imported from China are being sold at a supermarket less than a mile from the orchards of Kent.

Apples imported from China are being sold at a supermarket less than a mile from the orchards of Kent. The move by Morrisons at a store in the Garden of England has angered shoppers and disappointed growers, who say it flies in the face of demand for local food.

Britain relies on apple imports from southern hemisphere countries such as Australia and New Zealand, and, to a small extent, China, during our summer.

But it is unusual to find the Chinese Fuji apples – which are stored and shipped 5,000 miles to British supermarkets – at this time of the year, when local apples are available.

A Morrisons branch in Herne Bay, Kent, is selling apples from China even though it is just half a mile away from an orchard

They are currently on sale at Morrisons in Herne Bay, which is only half a mile from orchards where trees are heavy with fruit. The Fuji apples were being promoted via a large display at the front of the store at a price of £1.27 per pound. By contrast, small bags of Kent apples at £1 each had been relegated to the rear.

Fight for your right to Vegemite: Former Australian PM has jar confiscated at U.S. customs

One hump or two? Ice cream made from camel’s milk to go on sale in the UK

A member of staff said the decision to stock the Chinese imports ‘was not made locally’.

One shopper said: ‘I just hope no one buys them because it is an insult to Kent apple producers.’ 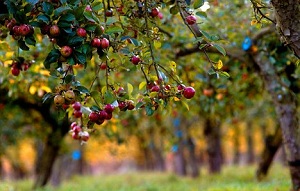 English orchard: But Morrisons in Kent is stocking Chinese apples

And Adrian Barlow, chief executive of English Apples and Pears, said the decision by Morrisons was ‘disappointing’ as the chain had made huge efforts to promote British fruit.

‘I can understand why people are fed up,’ he said.

But Morrisons insisted that the Chinese apples were available to improve choice for customers.

It added: ‘We know that being able to buy British is important to our customers and aim to sell British fruit and vegetables when they are in season.

‘From today, we will be heavily promoting British apples and allocating extra space to them in store.’

Someone pinned a notice on one of the large labels reading: ‘Are you trying to kill off our local fruit farmers?’

It was removed when seen by the supermarket staff.