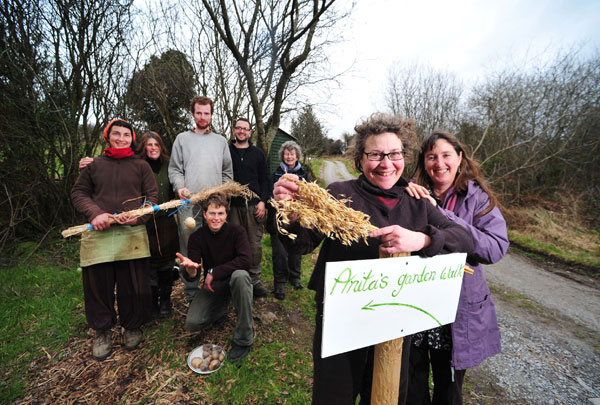 TWENTY years ago American, Anita Hayes founded the Scariff-based Irish Seed Savers Association, which exists as living testimony to the richness and wealth of the agricultural legacy of our ancestors.

TWENTY years ago American, Anita Hayes founded the Scariff-based Irish Seed Savers Association, which exists as living testimony to the richness and wealth of the agricultural legacy of our ancestors.

Anita was born in the American Mid-West and during her studies in ecological agriculture at Evergreen State College in Olympia, Washington, she was shocked to learn of the risks to food security through the loss of genetic biodiversity and began to focus her studies in this area.

Inspired by the Seed Savers Exchange in Iowa in the US, Anita found that there was no similar organisation in Ireland and as she was acutely aware of the importance of the work, she decided to give it a go here, forming the Irish Seed Savers Association.

Asked what brought her to Ireland initially, Anita said, “I fell in love. I moved to Carlow and married Tommy Hayes and we came to Clare for the Raheen Wood Steiner School and the music.”

Irish Seed Savers Association was founded in 1991, with the work initially starting out on a small farm in County Carlow before the couple moved to Capparoe, Scariff, in 1996.

“We were very fortunate to have the help of Dr Keith Lamb, who had conducted the original research into native Irish apples in the 1940s and Dr Michael Hennerty, former head of the Department of Horticulture in University College Dublin. Having moved to our present site in 1999, a FÁS community employment scheme developed by Bridget Carlin secured employment for many staff and we have grown steadily since that time,” Anita explained.

A few years later, with the acquisition of new land, Irish Seed Savers were able to build a purpose-built educational facility and a small shop and café. It currently offers a wide range of workshops on subjects such as organic gardening, bee keeping and creating an orchard.

“We have hosted a number of workshops for people with physical and intellectual disabilities in this horticultural therapy unit since it opened and look forward to hosting many more. We also have a colony of hives of the native black bee on the new land since 2008,” Anita added.

The Irish Seed Savers Association has many achievements under its belt, including the creation of the native apple collection containing over 140 distinct varieties, the native Irish grain collection with 48 varieties, a seed bank containing more than 600 rare and endangered vegetable varieties, along with the establishment of a native brassica collection, a native broadleaf woodland and wildlife sanctuary.

Its landscaped seed gardens and peaceful orchards at Capparoe are open to the public and house a colony of hives, as well as an orchard of over 33 self-rooting varieties of apple trees that require no grafting for propagation. According to Anita, “This is probably the largest collection of this type of apple tree in the world,”

“When it began, we didn’t get paid. We didn’t charge members, it was done in an idealistic way. A lot of the effort put in was urgent scientific conservation work and in doing the research we always had good help locally, as well as from the scientific community, who helped with the apple varieties and the development of our genetic policy,” Anita explained.

Outlining how far Seed Savers has come, the current director, Chrys Gardener, said, “In addition to our conservation work with seed and apple varieties, Seed Savers has increasingly become an important centre for educational programmes for adults and children, especially now with the huge interest in growing food and other sustainability skills. We have a wide range of weekend workshops in courses like seed saving, fruit and vegetable growing, cheese making, cookery and renewable energy, as well as environmental programmes and camps for children from five to 18. We also welcome volunteers who want to learn more about fruit and vegetable production and students who need to complete horticultural work experience.”

She added that this year Seed Savers has a new training programme for farmers and market growers who want to learn how to produce their own seed crops.

“We have 40 attendees coming from all over Ireland to six modules held throughout the year, focusing on all aspects of seed growing, harvesting and processing. Teaching farmers to produce their own seeds is the next logical step – to pass on this essential skill, once so widely used but now almost completely lost, in order to increase food security in Ireland,” Chrys explained.

“I’m sure when Anita started saving seeds at her kitchen table 20 years ago she never could have anticipated that Irish Seed Savers would become such a large and internationally recognised organisation, visited by thousands of people each year and featured on many television and radio programmes. This could not have happened without the vision, hard work and passion of Anita and many other individuals over the years.

“We’ve also been fortunate to have support from the Department of Agriculture, which recognises the importance of preserving Ireland’s heritage food crops. If Anita hadn’t started collecting and growing out these old Irish varieties and passing the seeds on to other gardeners, many of these varieties, so well-suited to our maritime climate, would now be lost forever to our gardens and orchards,” Chrys said.

Since retiring from Seed Savers Anita said she remains involved with the association but no longer as a director.

“I hold this work extremely dear to my heart and make myself available to anyone who might make use of my experience. I am very pleased now in retirement, which happened this year, that I can get back into my own garden and grow my own food and save seeds again from my small place,” she said.

She outlined that the consolidation of food resources into the hands of multinational corporations grows year on year and this also includes the ownership and control of many seed companies. As a result, she said, “We give up our ability to have the tools for food production at our folly”.

“I am extremely proud to have been part of this crucial work and have tremendous respect for everyone over these long 20 years who have worked so hard to bring it to where it is today. We are continually working to train and share these skills and my hope is that generations to come will be able to maintain these skills and seeds in stewardship for the future.

“As climate and oil availability and political instability continue to affect world food prices, the building of a stable local food base should be of national priority,” Anita concluded.

Outlining what 2011 has in store for Seed Savers, Chrys said with the help of LEADER funding, it will be a year of expansion and change.

“We are currently constructing a timber two-story barn in order to store our collection of over 50 varieties of seed potatoes and 150 varieties of apples.

“We are also planning to construct a new visitor-friendly seed bank and seed processing facility this summer, where visitors will be able to watch the entire process ‘from pod to packet’. These new buildings will help us expand our activities and increase our efficiency, while also bringing in more tourists to our beautiful 20-acre seed farm and orchards,” she concluded.