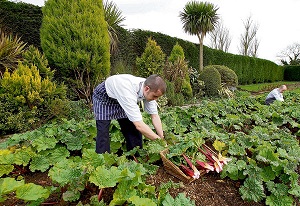 More and more restaurants have their own kitchen gardens providing food from inches, not miles, away. CATHERINE CLEARY visits a few green-fingered chefs for some advice

EVERY TIME I pick leaves from my €2 coriander plant, I feel the benefit of growing my own food, even on a modest scale. I have blitzed them into a grassy green oil, put them in polenta, sprinkled them on salads and added them, with mint, to yoghurt. This plant has lots of ancestors who led shorter lives; wilting and dying almost as soon as their plastic sleeves were removed. But the latest one got repotted and put in a sunny corner outside. It tastes gorgeous and provides fresh food from inches rather than miles away.

Some restaurants have been doing this for years, mainly those in hotels with space for plants. But now more restaurants are realising the benefits of being able to write “from our own garden” on their menus. So they are coming up with creative ways of finding space to grow food.

Kitchen gardens are tricky. They can surprise you with gluts of food, and disappoint when something gets munched by slugs or fails to thrive. It all takes time, money, thought and imagination. Surprises are not helpful when you are planning to feed 60 people or more every day. So behind most restaurant gardens is a good vegetable supplier who fills gaps when the garden isn’t at full steam.

AT MARLFIELD HOUSE in Wexford, the scallops were being served last week with a coriander pesto which had been made in the morning with fresh herbs from the garden.

The hotel is managed by sisters Laura and Margaret Bowe and the garden manager is their 81-year-old father Ray. “We’re always getting something from the garden,” Laura explains. “In very early spring, it was rhubarb, then wild garlic, and rosemary and thyme are there year round.

“We do get gluts, like a whole row of leeks that will be enough for 100 people, so weddings tend to benefit. We encourage couples booking weddings to change the menu a lot according to what’s ready.”

All main courses at the hotel now come with a garden salad. And guests often leave with an armful of rhubarb or whatever is fruiting that week. The garden has been providing food for the tables for 35 years and their mother Mary Bowe originally used its ingredients.

They don’t like things going to waste. “We try to use everything so we make compotes, jams and chutneys,” says Laura. Their gardener, Sean, looks at the numbers booked for lunch and dinner, and takes the ingredients to the chefs.

AT LONGUEVILLE HOUSE, near Mallow in Co Cork, the owner William O’Callaghan has been growing and farming food since they opened the historic house as a hotel in the 1960s. They start everything from seed in a heated sand bed in a polytunnel and move them onto shelves in another polytunnel, which gives them a year-round supply of vegetables and herbs.

O’Callaghan is introducing more Japanese greens. “I’m really into salads,” he says. “I love growing my own and cooking it. I’m not interested in imported beans from Kenya.” A separate garden provides herbs, including sorrel, which makes a great pesto and gives vegetable stock a kick.

O’Callaghan spends an hour or two in the walled garden each morning: a stone in the wall shows the structure dates to 1829.

Around it there is what’s called the Smoke Walk from the time when gentlemen smoking cigars would take a stroll around the garden.

A further 25 acres of orchard supplies apples. They are pressed and then distilled into brandy, which is matured in oak for three years. The raw alcohol is mixed with soft fruits and herbs to make liqueurs.

Sheep grazing in the orchard provide lamb for the tables and the pigs who root in the woodland are turned into cured hams, sausages, pudding and home-cured chorizo.

It is how a 19th-century household would have managed its food supply and involves a huge amount of labour, says O’Callaghan. It’s not a case of saving money by doing it themselves but of adding value. “You’re always trying to catch up with yourself,” he says.

IN DONEGAL, Donal Doherty of Harry’s Bar and Restaurant in Bridgend had never grown as much as a herb before he took on a disused walled garden and greenhouse last year. He decided not to grow potatoes and tomatoes because he can source them locally. Instead he is focusing on exotic vegetables that will be talking points on the plate as much as anything else. So the garden now has albino beetroot, purple sprouting broccoli and purple carrots that take 36 weeks to grow. They are planting Tuscan kale to give them a winter crop, too. 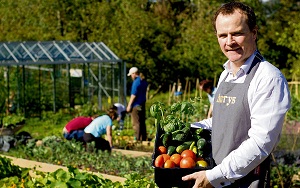 The garden, which is about two miles from the restaurant, is on the land of Karen Desmond, a good customer who offered him the refurbishment project and space to grow food. Doherty teamed up with local radio garden expert Gareth Austin and the garden is now run by Austin and students completing a Fetac horticultural course. Doherty loves to spend time there, as a haven from the busy restaurant and phone. “We’re taking about 10 mushroom boxes of salads out of it now,” he says.

The garden, which had chimneys installed in its walls so their heat could help peach trees to grow, has become a tourist attraction. In its heyday, it supplied seven greengrocers in Derry.

The set-up costs for new raised beds, 14 tonnes of soil, expert advice, planting and cleaning up the greenhouse came to about €3,000. Doherty reckons this year the garden will produce salad and herb crops for the restaurant to that value and cover its costs in the first year. The running costs are covered by the Fetac student labour.

Next they want to explore ideas for building an industrial-sized composter with a local engineering firm.

Are his customers thrown by the fact that the menu depends on what is available that day? “They’re used to the menu changing every day because it depends on the fish. We can tell them it will probably be something like this and people appreciate that,” says Doherty.

THE RESTAURANT KITCHEN garden with one of the best views in the country has to be the 200sq m plot on Howth Hill that provides food for Aqua Restaurant on the West Pier at Howth.

Restaurateur Dave Murnane started the garden in spring last year under the guidance of his friend, retired restaurateur Nick Healy. The garden isn’t saving them money but it is broadening everyone’s horizons. “It’s more the freshness and quality, and the knowledge of where it comes from,” he says.

The land is on loan from a resident whose pony-loving children have grown up. In the first season, they made the typical mistake of growing “loads of onions, cauliflowers and cabbages”, which took up most of the space and were easily and cheaply bought from Keelings, their north Dublin supplier. This season they have sown baby beets, turnips and courgettes, and 74 large trays of salad leaves, and more than a dozen large pots of herbs, which the chefs harvest with scissors in the mornings.

Healy used to run Dunderry Lodge near Navan, Co Meath, which had a Michelin star for three years in the 1980s. He had long lectured Murnane about the value of growing your own. “Nick is the gardener,” Murnane says. “I’m more of a ‘gardening-by-Google’ type. He’ll mention something we should try and I’ll look it up online.” One of the young chefs has 90 minutes of garden work a day built into his shift and he does the “lugging and weeding” work.

Specials in the restaurant now come from what has done well in the hilltop garden. Murnane has kept a blog charting the garden’s progress through sunshine, snow and spring weather.

It details how they get lobsters from their pots in the harbour and last year they had beef from Lambay Island. “It works in an environment like Howth.”

How to start a kitchen garden

Novice food growers should start by focusing on the things that they like to eat, says Michael Kelly, founder of Grow It Yourself (GIY) Ireland. “A lot of people say they grew cauliflower and were surprised to find that they still hated it as much as when they bought it in the shops,” he says.

His second tip is to start really small. “Don’t rotovate [break up] your whole garden. Pick three or five vegetables you really like and one additional one as an experiment.”

The best way to start, especially in a new garden where topsoil is designed for lawns and not plants, is to get a raised bed, Kelly says. “A 4ft-square bed is ideal with 10 to 12 inches depth of soil and compost.”

Making it a metre wide will mean you can reach into the middle without having to stand on the soil. “And it’s modular, so you can add another raised bed next year. We always advise people to allow their expertise to catch up with their enthusiasm.”

When it comes to planting, salads and herbs are a great place to start, Kelly says, because they will give you food within six to eight weeks and you could have salad from a raised bed all year-round, if you manage it well.

Most of us think of planting seedlings in March or April but mizuna and another salad variety, claytonia, can be planted in August and September to give you salad leaves in winter. “Garlic is also a good starter because it doesn’t need huge space. You can plant them four inches apart.”

Becoming self-sufficient in one vegetable is particularly satisfying. Thyme and rosemary plants can be bought as seedlings or more mature plants and give great value, while radishes will produce a crop after three to four weeks. “And I think they’re delicious with a bit of butter and lots of salt.”

In September GIY Ireland will be inviting chefs, restaurateurs and hotel owners to a discussion about growing their own food at their annual get-together in Waterford.