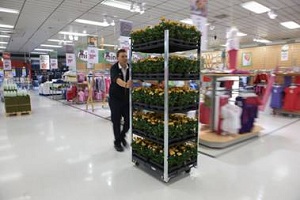 The pool of CC Containers – the European standard pot plant trolleys – has now been effectively closed to illegal intruders with the implementation of electronic labelling, RFID.

The pool of CC Containers – the European standard pot plant trolleys – has now been effectively closed to illegal intruders with the implementation of electronic labelling, RFID. This means that the pool operator, Container Centralen (CC), is now ready to invest in further development and quality improvement to the benefit of all users. At the same time, the company now markets a smaller low-noise and display-friendly flower trolley, the CC Euro Trolley.

During the spring of 2011, a number of plastic shelves have been tested on the CC Container in the Netherlands, Germany, Italy and Denmark. The users have now given their feedback to CC.

– ‘In general, everybody appreciates the design and the low weight, which makes it easier to handle the shelves. The low weight means better ergonomics as well as fuel savings and reduced CO2 emissions, which is all appreciated by the users. However, the users also have input for improvements of the design, for example some changes to ensure that water does not gather in the cavities of the shelf,’ says Tonny Vangsgaard Gravesen, CEO of CC.

CC are now working on the amendments and the final prototype will be ready in late September. This prototype will also be tested by users all over Europe to ensure that the shelf meets the requirements from the markets.

At the same time, CC’s new low-noise and display-friendly plant trolley, the CC Euro Trolley, is now used in live flows since the first large order was delivered to one of Europe’s largest retailers. The retailer uses the trolley for a variety of different products – not just plants – as it also works as a nice in-store display unit. The first few months will be a live market test, and the retailer will give his final feedback to CC in September. After this, the final design of the CC Euro Trolley will be made.

– ‘We already know that we will have to improve the shelves so that they don’t bend down. Other than that, the feedback has been very positive until now. We have a few hundred trolleys in stock, so other companies also have the chance to order some now for immediate delivery and to have an influence on the final design,’ says Tonny Vangsgaard Gravesen.

– ‘There is already a lot of interest in the new multi-purpose trolley due to the lower noise levels, lighter weight and nice design, so we expect a lot from this new trolley,’ Tonny Vangsgaard Gravesen concludes.

The first large order for the new CC Euro Trolley – a low-noise, light-weight and display-friendly trolley for plants and other goods – has been delivered to one of the largest retailers in Europe. According to Container Centralen there is already a lot of interest in the new trolley.