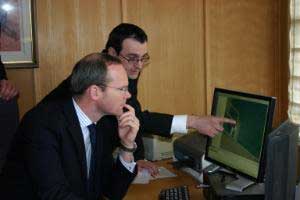 The Minister for Agriculture, Food and the Marine, Simon Coveney TD, today confirmed that the on-line mapping facility on the 2012 iNet, his Department’s online application facility for the Single Payment Scheme, has now gone ‘live’.

The Minister for Agriculture, Food and the Marine, Simon Coveney TD, today confirmed that the on-line mapping facility on the 2012 iNet, his Department’s online application facility for the Single Payment Scheme, has now gone ‘live’.

“In keeping with the practise of constantly improving the service and options provided by iNet, it is very encouraging to see that it has been technically possible to introduce this on-line mapping element for 2012” the Minister said, adding “this will now allow farmers or their agents, who need to submit maps to my Department, to do so through iNet, thereby dispensing with the need to submit paper maps. But the benefits go beyond this, because, by virtue of the maps coming in online, they will also receive the same timely attention that the on-line applications receive, resulting in greater efficiencies for all concerned. I am delighted to be in a position to confirm that this enhancement of iNet has now gone live”, the Minister said, explaining that “when I announced the opening of the 2012 iNet some weeks ago, I indicated that it was intended to introduce this facility for the 2012 campaign”.

“Initially, farmers and their approved agents were attracted to iNet by the fact that it guaranteed immediate, verifiable receipt by my Department of their applications and, through the system of in-built validations, significantly reduced the numbers of errors that could be made, thereby ultimately leading to speedier payment. However, the introduction of the on-line mapping element is a further positive for users of iNet, and makes the option even more attractive”, said the Minister.

Minister Coveney again urged anyone considering availing of the on-line facility to make enquiries via the website, www.agfood.ie or, alternatively, the dedicated Helpdesk at Lo-call 1890 252 118.

Concluding, the Minister noted that over 54,000 applications were submitted through iNet under the 2011 Scheme, representing a cumulative seven-fold increase in the five years the facility has been available.