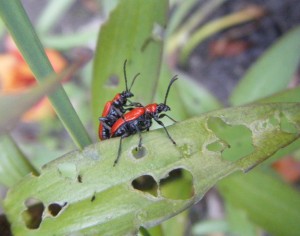 Where was it seen? The Red lily beetle (Lilioceris lilii) was recorded in a garden near Cork City on March 4th 2011.

Has it been recorded before in Ireland? The Red lily beetle was first recorded in Belfast in 2002 and just once before in the Republic of Ireland in Cork City in 2009.

Where was it seen? The Red lily beetle (Lilioceris lilii) was recorded in a garden near Cork City on March 4th 2011.

Has it been recorded before in Ireland? The Red lily beetle was first recorded in Belfast in 2002 and just once before in the Republic of Ireland in Cork City in 2009.

Any action taken? The species was found on or near Lily plants that suffered extensive damage on three occasions since March 4th. To date, 22 individuals have been removed from the garden.

Mr. John O’ Sullivan first noticed a single distinctive bright red beetle in early March but after seeing 12 individuals on April 21st John contacted Dr. Roy Anderson about the species presence in Ireland. Dr. Anderson verified the species identity (specimens are retained in the Data Centre) and noted the rapid spread of the species after its first recorded sighting in Ireland in Belfast in 2002 to the immediate surround areas (<30 miles radius from origin of first sighting). 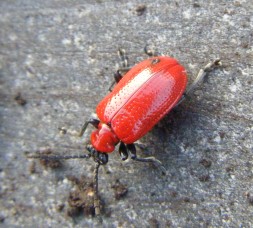 The bright colours and its association with lily plants or fritillaries should serve to identify it. There are few other Irish beetles with such striking colouration. However, watch out for spotless forms of the 2-spot and 10-spot ladybirds which occur only rarely. These have an almost circular outline whereas the lily beetle is elongated and the elytra or wing cases are nearly parallel-sided.

Are there any likely impacts: There are few if any native Irish plants belonging to the Liliaceae which might be vulnerable to attack by the lily beetle. Lily of the valley and the fritillaries do not occur naturally in Ireland. Currently damage has been reported exclusively from garden plants.
**species description and likely impacts taken from Habitas fact sheet**

What can you do?

If possible take a photo and submit a record of it to the National Biodiversity Data Centre for verification.