Grocery symbol group Londis has invested €150,000 in an Irish grocery wholesale market first – a web-based application that leverages up-to-the-minute sales information and revolutionises the ordering process from the shop floor to the warehouse. 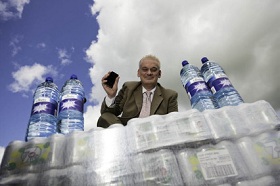 Grocery symbol group Londis has invested €150,000 in an Irish grocery wholesale market first – a web-based application that leverages up-to-the-minute sales information and revolutionises the ordering process from the shop floor to the warehouse.

The system, which is called ISIS (Intelligent Systems Increase Sales), is an information portal for Londis Retail members and is designed to act as an intuitive support for each Londis retailer.

The centralised platform which leverages up to the minute sales information from the Londis Warehouse ensures retailers benefit from live feedback on Category Management, promotional statistics and seasonal sales patterns.

By identifying and prompting top sellers, promotional lines and other seasonal opportunities which may otherwise be overlooked in the ordering process, each Londis retailer is assured of a very focused product offering which closely mirrors what customers are demanding in his or her store.

The Group employs over 7,000 people in retail, distribution and support services.

ISIS was designed and developed in-house by Chris Donnelly, head of IT with Londis and Emma Gregan, business systems manager.

As a direct result, 30pc more retailers across the group are getting more product on promotion, meaning that ISIS is adding genuine value to their business.

Gregan says Londis stores using ISIS have increased volumes purchased across every category including non-grocery, resulting in a much broader range in store.

“It offers intuitive support for individual Londis retailers, identifying and prompting top-sellers, promotional lines and other seasonal opportunities for their specific stores, which may otherwise be overlooked in the ordering process,” Gregan said.

“The ultimate benefit is that the system assures a focused product offering which closely mirrors what customers are demanding, which maximises sales for the retailer.”

Following the introduction of ISIS, Londis’ private label range has seen a 20pc increase in sales as retailers see the value in expanding the range they carry. This has significantly improved participation of the group’s private label.

One early adopter of the Londis ISIS platform, John McCarra of McCarra’s Londis, Clonmel who said: “It simplifies my ordering process with exceptional clarity on special offers and key deals. It gives me great confidence through prompting product lines I may have overlooked. It ensures that I do not over order and yet ensures I have adequate stock levels on fast moving lines.

“The fact I can place my order any time or day of the week is also of huge benefit to me. The overall concept is really quite a simple one however the execution by Londis is excellent.”

Plans for an iPhone app version of ISIS

The ISIS platform will also be made available to ADM Londis retailers via an iPhone application which is due to go live shortly.

In the meantime a number of tech-savvy store owners have been connecting to the system online through their smartphones, enabling them to have mobile access to live sales information for their business from the Londis warehouse.

Donelly said a number of further benefits will be unveiled to retailers over the coming months as part of a phased development of the ISIS platform by the Group.

“In our industry, continued evolution and innovation are a must in order to sustain and build your retailer offering. Initial feedback from our retailers who have availed of the system has been very positive.

“We have seen significant growth in category participation from retailers who are using ISIS as they are now prompted to shop across more commodity groups. Indeed, stores which are using ISIS are also purchasing on average 21pc more on promotion than other stores thereby accessing additional value that they may otherwise have overlooked. The intuitive aspect of ISIS is delivering real bottom line benefits for our retailers.

“Developing this platform in-house was the most logical approach. As a Group, we have prioritised IT innovation as a central component of our offering to Londis retailers with a team of IT professionals who are best placed to know, understand and to meet the specific needs of Londis retailers.

“This is clearly demonstrated by ISIS, a platform which is accessible, easy to use and has a very real impact on each store’s business performance,” Donnelly concluded.