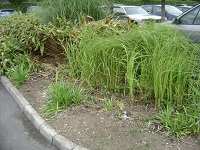 This is a follow-on piece and photos sent in by John Lord in relation to his recent Irish Times letter. You can also hear debating his opinion on RTE’s Liveline if you could only find the link. (If you have it send it on)

Below are photos taken at the Irish National Botanic Gardens in June 2011. As a former student I was appalled with the poor standard of much of the planting and maintenance – particularly the main herbaceous border, once described by the former director, Aiden Brady, as: “One of the finest in Europe” – how standards have fallen!

This is a follow-on piece and photos sent in by John Lord in relation to his recent Irish Times letter. You can also hear debating his opinion on RTE’s Liveline if you could only find the link. (If you have it send it on)

Below are photos taken at the Irish National Botanic Gardens in June 2011. As a former student I was appalled with the poor standard of much of the planting and maintenance – particularly the main herbaceous border, once described by the former director, Aiden Brady, as: “One of the finest in Europe” – how standards have fallen!

My name is John Lord. I have, besides my horticultural diploma, a degree in botany, and a cert in tree craftsmanship. I own and run a garden centre in Co. Meath, with a particular emphasis on perennial plants. I worked in horticulture in Germany for a number of years. Gardening is my career and my hobby. This is why I feel so annoyed with the low gardening standards in OUR botanic gardens.

Photo 1: A poorly maintained bed greets the visitor, at the car park, with dwarf bamboo, not cut back after winter damage, and looking rough. It is never advisable to plant dwarf bamboo with perennials and ornamental grasses, as they run so badly and take over. Pseudosasa japonica in opposite bed (not pictured) is another very invasive, but tall, bamboo and has already overtaken some of the plants in front of it – which still have their descriptive labels in place, barely visible! This is known as “the plant it and walk away” school of gardening. These beds were planted with little thought .The laurel hedge at the back of the car park has bind weed growing along it. Welcome to the IRISH National Botanic Gardens!

Photo 2: Border in front of first major new building, on way in, has variegated brunnera (Brunnera macrophylla) which has being allowed revert back to green. It is so obvious, and a lot of employees and students must past this spot every day. (Quote on brunnera from R.H.S. Encyclopedia of perennials: “Variegated cultivars may also revert to green, so remove those shoots”)

Photo 3: Photo of Chaenomeles family bed, with Chaenomeles shrub covered with bindweed. Pretty pink flower is willow herb (Epilobium hirsutum) – an easily removed weed. The entire bed , which is quite large, is in a dreadful state. 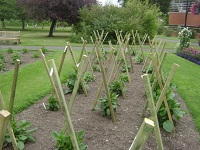 Photo 4: Photo of dahlia staking. I don’t really get this one – is it some kind of art installation, was there a job lot of tree stakes bought, or did pandas eat all the bamboo canes. Notice the wholesaler’s tags blowing in the wind, like little flags. Could no one be bothered to remove them? 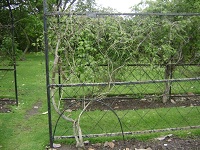 Photo 5: Dead Clematis Montana, probably killed last winter. How long is it going to be left there? 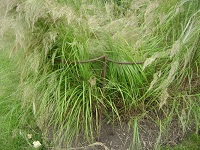 Photo 6: Ornamental grasses are grown for their airy looseness and their movement in the wind. These are hemmed in with heavy metal supports – awful – and a new one on me. Do the students bring this peculiar horticultural practice with them when they leave? 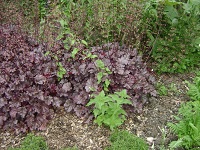 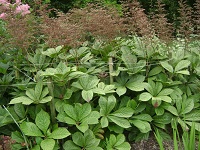 Photo 8: Clump of Rodgersias staked, why? – or even – why bother?

Photo 9: Ligularia dentata staked!!! – a plant with short flower stems. Do they just go into the border with a lorry load of stakes, and stake anything that is green and doesn’t move? How are the students to learn how to garden properly?

Photo 10: Lovely dark foliaged Actaea simplex, nicely sets off green bind weed, with, of course, obligatory stakes. I have never known this plant to keel over.

Photo 11: A clump of one of the taller Ligularias, which have small flower heads and should not need staking. A good clump of nettles can be seen peaking out from the centre – makes a change from the bindweed, I suppose.

Photo 12: Achilleas with stakes – a good side view of how not to do it. These plants will never top their stakes.

Photo 13: It can’t be! It looks like bind weed is growing up a fork handle!

Photo 14: The worst I have ever seen! These Sidalseas are already out of flower, and will grow no higher. They do not need unsightly stakes and string. All they need is to have their spent flowers removed – 5 minutes work!

It is hard to know where to begin when commenting on the state of planting, and particularly maintenance, or lack of it, at the national botanic gardens.

I remember in Berlin a few years ago, observing a gardener working on a very impressive mixed planting of perennials and ornamental grasses. It was on a traffic island and the gardener painstakingly worked through the entire planting, over the course of two days – mostly on her hands and knees! Plants were taken out, new ones put in. Cutting back and dead heading was done. And then she was gone, on her bike. Work done, no fuss!

I saw the same type of craft gardening in action in Toronto, where a group of gardeners were working on the best mixed borders I have ever seen! Wonderful to watch, and the plants were good too!

What I’ve seen abroad is craft gardening as it should be. It needs more than sitting in the lecture hall to learn these skills, no matter how diligent the student. It has to be picked up, by example in the field. How (and where) is the Irish horticultural student to learn his craft?

Perhaps the concept of “craft” is the problem. Since my day, the Amenity Horticultural course has lengthened by a year and achieved degree status no less. Maybe the authorities want nothing what so ever to do with lowly craft gardening – we Irish love our professions. But I know this much: waving a degree certificate – whether pass or honours – in front of a border riddled with bind weed will not remove one bit of it!

Up to lately, when a customer asked me how do they rid a border of bindweed, I would always reply: ”with great difficulty”, thinking to myself that this weed always catches the amateur out. I never dreamed that, in our premier training place for horticulturists in this country, it would be almost out of control! With the place over run with professional horticulturalists – with or without degrees.

What is to be done?

I for my part intend to send these observations as far and wide, both home and abroad.

Perhaps the OPW (office of public work) is not the correct body to run the National Botanic Gardens. It is not noted for its work ethic. Craft gardening requires knowledge, skill, attention to detail, and constant WORK. “Plant and run away gardening” does not work!

For a start, the golf buggies that members of staff whiz around in should be got rid off. It is only by walking the grounds that problems can be spotted early. If staff need to go to further parts of the grounds, I suggest a few bicycles. Golf buggies and “sustainability” – what a laugh!

As it stands, our National Botanic Gardens in Dublin, Ireland is not a suitable place to train our next generation of gardeners.