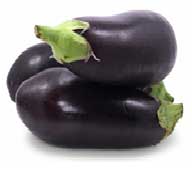 Home grown Aubergines will be available in commercial quantities for the first time in Ireland this year and will result in considerable import substitution. Locally grown produce always has an edge in freshness and taste as the fruit can be left to ripen longer on the plant. The first fruits are being harvested at the moment, with the main season due to start soon.

Aubergines are becoming increasingly popular in Ireland, with retail sales increasing by over 20% both in value and in volume over the last two years.  In 2011, 775 tonnes with a retail value of €1.5 million were sold in the retail trade. This is impressive against a background of modest growth in fresh fruit and vegetables in general. The growth in sales is set to continue with the crop proving to be most popular with women in the 25-44 year old age group. As well being a versatile ingredient, they are also quick and easy to prepare which suits modern day time-poor consumers. Their affordability allows consumers to experiment with increasingly popular exotic cuisines in a cost effective manner.

Aubergines are also known as “eggplant” in the United States, Canada, and Australia because the first aubergines in those countries were purely ornamental and featured egg-shaped white and yellow fruit. An 80g portion counts as one of your five a day.

For more information on aubergines, go to our website www.bestinseason.ie