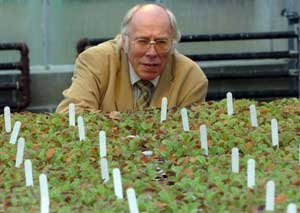 Environmentalists have driven a campaign to preserve peat with the aim of banning its use in gardens. But there will be a big price to pay, as Chris Benfield reports. Politicians are on the way to creating another special disadvantage for British agriculture.

Environmentalists have driven a campaign to preserve peat with the aim of banning its use in gardens. But there will be a big price to pay, as Chris Benfield reports. Politicians are on the way to creating another special disadvantage for British agriculture.

A political consensus against allowing the use of peat to grow plants is progressing towards a commitment to ban it in England. However, Scotland, Wales and Northern Ireland, are reluctant to follow suit with a ban and the rest of Europe definitely will not.

The growers protest that their contribution to the destruction of peat habitats is tiny and that picking on them is a gesture to environmentalists for whom peat is a symbolic issue.

Three of the last big peat extraction sites in England, in Yorkshire and Cumbria, have already been turned into nature reserves, at taxpayers’ expense, and most of what we use is imported.

“Successive governments, wanting to be seen to be green, have been persuaded to do something about peat – probably because most of the public don’t know what it is and don’t care very much,” says Professor Jack Rieley.

He was made an honorary professor of Nottingham University for his 40 years of work on peatland ecology around the world and he is secretary of the UK branch of the International Peat Society.

He adds, “This policy is something the environmental lobbies have been pressing for for 20 years and I think this Government wants to end the matter. But it is missing the point altogether.”

Prof Rieley says the UK horticulture industry is “a piddling contributor” to the loss of peat bogs and claims the Government is justifying a “stupid” policy with “grossly misleading” statistics.

He says Defra’s estimate of CO2 emissions from UK peat extraction “has lots of noughts in it but fails to point out it is only 0.07 percent of total emissions”.

He adds that a lot of peatland has become too dry to support the wildlife which makes peat bogs unique.

Some, he believes, would benefit from being dug out down to the water table.

He says peat which might still be turned back into permanent bog is being washed off the hills because of erosion caused by drainage.

Much more of it is being lost in this way than is being dug for horticulture in the lowlands.

Farming Minister James Paice came into office promising to end “gold-plating” of European requirements with extra UK targets. And in his autumn statement two weeks ago, the Chancellor, George Osborne also promised to make sure, in his words, that “gold-plating of EU rules on things like the Habitats Directive are not placing ridiculous costs on British business”.

Defra Secretary Caroline Spelman has pledged a review of the implementation of the Habitats and Wild Birds Directives and told the BBC she was keen to make sure that concerns for bats, for example, did not interfere with necessary church repairs.

Graham Ward, a veteran of the Humberside salads business, an OBE for his services to horticulture, and a growers’ spokesman for the NFU, was infuriated to hear Mrs Spelman talking about “bats in the belfry” but making no mention of her unilateral declaration of war on peat.

A White Paper she published in June proposed a three-stage timetable for eliminating peat use by 2030, which sounded comfortingly far off. And it said all would be accomplished voluntarily.

But Mr Ward warns, “Once a government has targets written down, the pressure starts.

“These dates are dates to be achieved and as soon as they were published, a task force was at work to make sure they are.

“It is not long to 2015 and there are trees already growing which will be wanted for planting then.

“The question of whether peat has been used to produce this or that is already arising. And if the Government does decide it wants peat-free food by 2030, you can rely on the supermarkets to start insisting on it right away.”

In a letter to the Treasury last week, Mr Ward said: “This policy was inherited from the Labour Government and we had expected, given the Conservative promise of less regulation, to see it removed.

“However, it was instead strengthened and expanded. Growers in the EU have no similar restrictions and because of EU free trade rules will be able to compete in the UK market whilst ignoring the Defra regulations.

“Mrs Spelman indicated her main concern, relating to her instruction from the Chancellor, was bats in churches.

“That is a community issue and not an economic one. It appears Ministers are not getting the message that we are in an economic meltdown and need to sort out priorities.”

A leading Yorkshire grower said: “The Defra task force is due to report back by the middle of next year. And its terms of reference are to find ways to implement the policy, not to tweak it.

“To be completely peat-free by 2030 means we have to start rolling a lot earlier than that.

“We have got kit which will not work with a peat-free growing medium.

“An impact assessment commissioned by the Government has estimated a £400m cost to UK horticulture to adapt – about one percent of turnover from 2012 to 2030.

“Most companies’ profits are about five percent of turnover, so we are looking at a penalty of 20 percent of earnings.”

Some progress has been made on finding substitutes for peat for some applications.

But many problems remain unresolved.

In view of that, the NFU argued against putting any firm targets into the White Paper. But it was ignored.

The “milestones” laid down started with “a progressive phase-out target of 2015 for government and the public sector on direct procurement of peat in new contracts for plants”.

The Yorkshire Post asked Defra if this meant public purchasers were expected to stop buying plants grown in peat.

After consultation, a Press officer said: “It means that public purchasers are being asked to specify that plants should not be supplied in or with peat – we cannot at this stage rule out the possibility that peat may have been used at some point in the growing process.”

It would be impractical to re-pot large numbers of plants grown in peat so in practice, even this fudge would effectively mean a ban on peat use beyond the seedling stage for landscaping plants.

The NFU’s negotiator on the Task Force, Chris Hartfield, told us: “To be honest, I don’t know what it means. And I don’t think Defra knows what it means yet.”

The Government White Paper, The Natural Choice – Securing The Value Of Nature, published in June contained references to habitat conservation throughout.

Defra says peat is not included in the review it has promised because peat policy is about something different – “biodiversity and climate change”.

The White Paper repeated a Labour promise to end peat use by gardeners by 2020. It set a longer-term target of eliminating peat altogether from the production of food and ornamental plants by 2030.

Source: Yorkshire Post – Growers Claim They are Being Penalised Over Peat