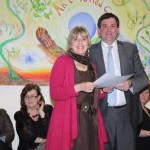 Minister affirms future for Organic Food Producers. In a wide ranging address to graduates of An tIonad Glas the Organic College, Dromcollogher recently, Minister of State with responsibility for Horticulture, Mr Shane McEntee said that Organic Food Production was a good news story and the skills that the graduates learned will be in demand even more so in the future as a growing population will need more and better quality food.

Minister McEntee commended the College on the provision of quality courses in Organic Growing and Sustainability over a 21 year period since its foundation in 1991. “The practical elements of the courses combined with the theoretical knowledge gained are invaluable” said Minister McEntee. Referring to A tIonad Glas as the original driving force for Organic Education in Ireland, Minister McEntee acknowledged the vision of the college and its partners in developing a Distance Learning initiative which continues to be such a resounding success.

“My job is to encourage you to use the knowledge and expertise that you have gained in this College, to avail of the market opportunities that clearly exist and by doing so, maximise your potential income” said the Minister. Minister McEntee also stated that he is pleased that applications are now being accepted for the 2012 Organic Farming Scheme.

Commending the students for their enterprise in forming an in-house co-operative to add value to food and set up the College Shop, he said the range and taste of food we had could hold its own with any in the world. As a farmer, he noted the great joy of watching crops grow and bringing them to market and he was encouraged that more young people are looking to horticulture for a meaningful career.

His Department appreciated the vision and learning provided by the V.E.C. and wanted graduates to get the best possible education for the future.

Eimear Brophy Adult Education Officer with Co. Limerick V.E.C. said it was vital that adults considering returning to education have a wide range of options. There is she said so much to learn from nature that can sustain us on the lifelong learning journey. Drawing on the theme of the College’s Quiet Room urging us to; “Be still as a mountain and flow like a river”; this was a great motto for any adult thinking of personal growth.

Noting that the college had gained a reputation nationally and internationally, she congratulated the staff and learners who had been leaders in innovation from developing courses for National Certification, to setting standards for added value to a range of food products, many of which were available for all to taste before and after the Award ceremony.

She particularly thanked the family members who were present and supported the learners to allow them the time to return to study.

Brendan Burke Principal of Hazelwood College thanked the Minister and the Department of Agriculture for their vision in supporting the Development of the Distance Learning programmes and noted the variety of courses from FETAC Level 3 to Certificate and Diploma Standard at Level 5 and 6 which the College provided.

Paula Pender Co-ordinator of Distance Learning said the use of modern technology had allowed people develop an online growing community without the cost of travelling long distances.

She told the graduates how over forty learners annually took Distance Learning Courses and as the courses were modular this was a further pathway into the educational system and towards increasing the numbers of organic growers in the country.

Jim McNamara Educational Director and one of the founders of the college said there was a need for more supports to get young graduates established as farmers and growers. He noted there is a major opportunity in the current Common Agricultural Policy review to put policies in place to bring new people into farming by way of making land, machinery and mentoring services available.

He also highlighted the genuine concerns among organic producers that genetically modified field trails could lead to cross contamination.

The prudent course for Ireland, he suggested was to collect and breed from the best disease resistant potatoes from around the world, without using genetically modified means that would threaten our unique selling point as food producers in a G.M. free Island.

Dr. Sinead Neiland Horticultural teacher at the College and former Chairperson of I.O.F.G.A noted that over the years the college had trained a large number of successful organic growers. These, she said had a multiplier effect in their own communities and were reducing our food imports as well as generating self employment in Ireland.

Marion Harnett representing students said that as a farmer returning to study she had learned of many new possibilities of diversifying. She had also benefited from the variety of life enriching experiences that organic and co-operative learning can bring. Further education for adults she said was vital and totally different from schools of the past. It was she said well worth taking that first step.

Source: The Organic College – Graduation Ceremony at An t-Ionad Glas