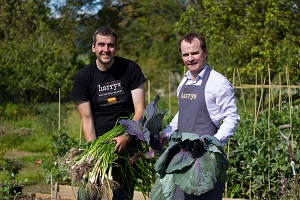 Harry’s Restaurant in Bridgend has been getting rave reviews and much-deserved plaudits of late including an award from Bord Bia as the “Just Ask Restaurant of the Year”.

Harry’s Restaurant in Bridgend has been getting rave reviews and much-deserved plaudits of late including an award from Bord Bia as the “Just Ask Restaurant of the Year”. Run by Donal Doherty, Harry’s is managing to buck the recessionary trend in the hospitality sector by attracting people in their droves to one of the remotest parts of Ireland on the Inishowen peninsula in Donegal.

How are they doing it? By serving only the freshest, local and seasonal produce, and by growing their own grub. The origin of almost every item on the Harry’s menu is explained with the vast majority of produce coming from the Inishowen peninsula. Particular importance is given to local farmers, fishermen and local artisan suppliers. “The closer you get to the source of the food, the better it tastes and the more proud we are to serve it,” says Doherty.

In the past year Harry’s have turned attention to herbs and vegetables, part of the local food supply puzzle which was hard for them to solve. “We had good local sources for some summer salads, herbs, root vegetables and of course Donegal potatoes, but outside that we were reliant largely on imports,” he says.

Doherty turned to GIYing and to GIY Ireland for help. In late 2010 he worked with GIY to establish GIY Inishowen and based the fledgling group at the restaurant. GIY is a registered charity which started in Waterford in 2009 – there are now nearly 10,000 people involved in the organisation and nearly 100 GIY groups around Ireland. GIY meetings are free of charge and open to anyone in the area interested in growing their own food and have the aim of inspiring people to start GIYing and giving them the skills they need to grow successfully.

GIY founder Michael Kelly gave a talk at the launch of GIY Inishowen on a cold December evening in 2010 and was astonished to discover nearly one hundred people crammed in to the room. “I had heard so much about Harry’s it was great to travel up to Bridgend and finally meet Donal. We’re delighted to have the Inishowen group based in the restaurant because they have such a clear understanding of the importance of home-grown and local food. It was incredible to see so many people show up in the middle of winter to find out more about growing their own veg.”

Inspired by the GIY group, Doherty worked to convert a neighbour’s disused walled garden in to a thriving vegetable garden for the restaurant. The walled garden included an orchard and a 40-foot greenhouse. “Linking up with GIY networked us into a whole community of growers and sparked ideas on how we could develop a kitchen garden. We are slowly restoring the space but already, we have been nearly self sufficient in salads and herbs since May, just three months into the project.”

Buoyed by this success Doherty is expanding his GIYing and putting more and more home-grown produce on the menu at Harry’s. The garden has yielded produce that they can’t source locally such as tomatoes, celery, cabbage, beans, peas and albino beetroot. The focus he says is on growing things that are tasty, not otherwise available locally and that look fantastic on the plate. “In the summer months, every salad and vegetable right down to the purees and flowers on the plate will be coming out of the garden. For later in the season we have lots of Tuscan kale, purple Brussels sprouts, purple carrots, leeks, and other winter crops planted.”

A key decision for the Harry’s team is whether to expand the kitchen garden and aim towards what must be the “promised land” for restaurants – complete self-sufficiency. “The garden won’t keep us going 12 months of the year in its current operation, so the next decision for us is whether to make the project even bigger by adding more polytunnels and possibly adding a full time gardener. In that scenario it would be possible to almost totally supply the restaurant year-round from that space and the garden becomes an attraction in itself.”

His advice for peers in the industry? “At the very least restaurants should consider having a herb patch. I know our herb bill alone ran in to thousands last year. Salads have been so easy to grow and are all the more delicious when picked just before service. I’d say give it a try.”

Doherty also believes that there is an unexpected side benefit to the project which busy restaurateurs will appreciate. “It doesn’t feel like work,” he says. “It’s almost an escape and a great space in which to relax and work away. Getting boxes of the tastiest and freshest produce every week is the bonus!”