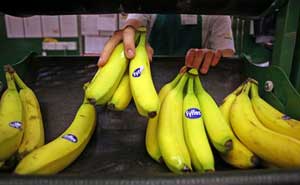 Revenue at fruit distributor Fyffes rose by 14.5 per cent in 2011, as the company saw strong growth across all its product categories.

Revenue at fruit distributor Fyffes rose by 14.5 per cent in 2011, as the company saw strong growth across all its product categories.

Preliminary results showed total revenue for the year was €850 million, some €108 million higher than a year earlier. That included €63.8 million from its stake in German distributor van Wylick, which it bought in March 2011. Excluding the impact of the new acquisition, like-for-like sales were €44.1 million higher, or 5.9 per cent, than the previous year.

Adjusted earnings before interest, tax, depreciation and amortisation were €29.6 million in 2011, a little over 10 per cent higher that the previous year, Fyffes said.

Fyffes said increases in earnings were due to a combination of continued improvements and efficiencies, combined with volume growth across its product categories.

Fyffes grew its earnings in its banana category, reporting a “low single digit year on year increase” that the company said was “satisfactory” given the rising costs. Selling prices rose slightly over the year, and volumes increased as Fyffes secured more business with new and existing customers.

Profits in the pineapple category were also higher, with volumes in the sector rising 10 per cent. In the US melon business the company bucked less favourable market conditions to increase revenues by 7 per cent in 2011, driven by further volume growth, while remaining very operationally efficient and focused on its cost structures.

“Fyffes is pleased to report a strong result for 2011, towards the top end of its target range, with good organic growth across each of our product categories,” said chairman David McCann. “The group has had a positive start to 2012, with improving pricing in continental Europe.”

The company said it is targeting an EBITA result for the year in the range €22 million to €27 million.

The company was also affected by a 40 per cent share in the after-tax losses of Balmoral International Land Holdings, which amounted to €3.5m in 2011. Fyffes has written down its investment in Balmoral to €50,000.

Total operating profit for the group was €13.2 million for the year, compared to €8.7 million in the previous year.