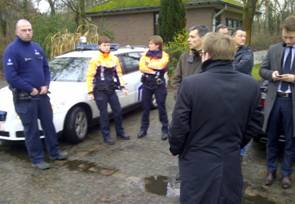 During a police raid at two locations in Belgium recently, fake CC Container material as well as computers with e-mails and container balances were seized. Container Centralen (CC) state that they will “go all the way” to stop the fraud.

Police and lawyers preparing to enter the facilities.

During a police raid at two locations in Belgium recently, fake CC Container material as well as computers with e-mails and container balances were seized. Container Centralen (CC) state that they will “go all the way” to stop the fraud.

To protect the CC Container system, which is the acknowledged standard for transportation of potted plants in Europe, all CC Containers were equipped with RFID tags by 10 January 2011. Legal CC Containers can therefore now easily be identified in the system.

– “Having the first peak season with RFID behind us already, the industry is now familiar with the technology and the processes. We are happy to see that some customers now also fully integrate the technology in their administration systems to gain the full benefits of automated order management, immediate electronic data transmission and so on,” says CC’s CEO Tonny Vangsgaard Gravesen. “However, it is a real nuisance and also costly and time consuming for users in the system when other users introduce fake plastic tags without RFID into the system, which can’t be scanned, and of course are not accepted in the system. CC therefore sees it as an important task to help stop this fraud.”

Since the RFID implementation, CC has cooperated with the police and private detectives in a range of European countries to investigate the occurrence of illegal CC Container material, particularly the new red RFID padlocks. On 21 December 2011, they carried out the first raid which took place at two locations in Belgium; a transport company in Wetteren and a grower in Laarne. The raids were carried out by police, bailiffs and lawyers.

At the transport company, undercover private detectives had bought fake RFID tags as well as illegal Container Centralen name tags prior to the action. Although the owner had been caught red handed he denied the accusations and refused to answer questions, legal action will follow.

At the grower’s, the owner was also caught red handed as a quantity of containers with fake brand new RFID tags were seized, along with the owner’s computer including e-mail correspondence and container management system. Legal actions against him will follow too.

– “This was only the first of a range of actions that we have planned, not only in Belgium, but also in other countries as well,” says Tonny Vangsgaard Gravesen. –“We will go all the way to stop this fraud, and we won’t just go after the producers but also the users of the illegal material,” he concludes. 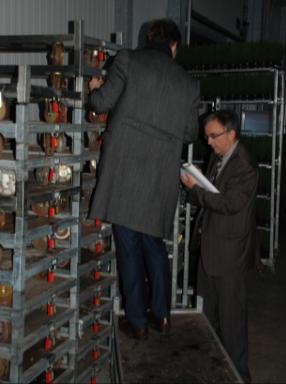