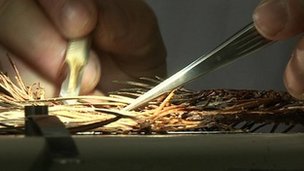 The two diseases spread in different ways and can be hard to prevent if caught at a late stage. It is thought that the P ramorum may have been brought into Northern Ireland on shrubs, almost certainly rhododendron. This disease can have over 100 hosts but not all of them will show the disease or even react to it. Luckily, the rhododendron does.

The Department of Agriculture, who police plant health in Northern Ireland, are on high alert for infected plants.

From checking baggage brought in by international travellers to inspecting plant ‘passports’ on commercially imported plants, the inspectors are trying to avoid more outbreaks of diseases previously unknown on the island of Ireland.

I followed Stephen Hamilton, a Department of Agriculture plant inspector around a large garden centre in Belfast. He headed for a trolley load of rhododendrons fresh in from Holland. “The first thing I look for is the plant passport so I’d be checking that it carries the correct paperwork,” explained Stephen.

“The passport provides us with a means of traceability. Then I’d do a general health check on the plants themselves. “If I did notice anything peculiar, I’d have to issue a detention notice. A sample would then be sent off to the lab in Belfast.”

If the sample proves positive for a disease then the plant will be destroyed. The department also has the power to set up an exclusion zone in the premises if it is thought the disease may have spread, perhaps by spores.

This time the plants got the ‘all clear’. Most plants coming into Northern Ireland come through other European states. They would already have been checked at another border before entering Europe. But that isn’t always a guarantee that all is well.

Recently over 40,000 poinsettias had to be destroyed in England when they were discovered to be infected. Which makes nervous reading for the Greenmount College of Agriculture and Horticulture. They buy in poinsettia every year as a training project for students. 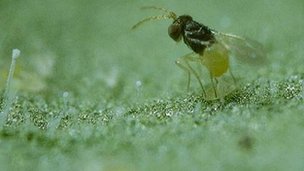 As soon as they arrive, the plants go into an intense bio-security, as Teresa Maguire of Greenmount explained. “This plant would have the risk of tobacco white fly,” she said. “Because of that we would put it through a quarantine period of three weeks. It’s monitored on a daily basis.”

Handling a tricky plant like this provides real-life bio-security experience for the students. They learn how to handle and monitor the plant. This even included the introduction of a little wasp to the plants. “Once the plants come out of quarantine, we introduce biological controls,” she said.

“One of the controls is the encarsia wasp. It’s a tiny wasp and it heads off to find a food supply, specifically the tobacco white fly if it’s there.” The wasp is harmless to humans and eventually dies off in the cold, making it a safe predator to introduce. The poinsettia are then sold by the students as part of a commercial project. The funds they raise enable them to travel on work experience projects.

Poinsettias are very popular at Christmas and are usually all sold before the even leave the greenhouses. Even more reason to look after them very carefully. The extra vigilance by the Department of Agriculture could be paying off already.

Aerial surveys and extra ‘tree’ patrols have spotted the series of Lawson cypress infections (Phytophthora lateralis). Per hectare of trees, Northern Ireland has more infected Lawsons than some other parts of the UK. Or perhaps it is the only part of the UK that has found all the infected trees?

The key weapon in keeping new infections out is public awareness. Many travellers still bring back cuttings from abroad or a nice potted plant from another part of the UK. In doing so, they could be helping introduce the next outbreak of plant disease.