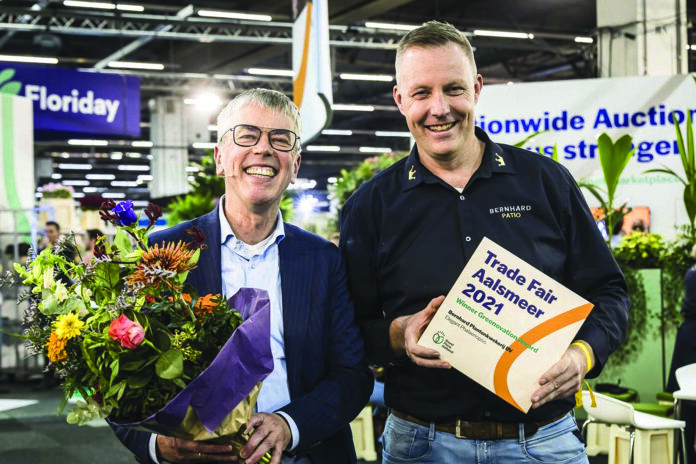 Dutch-based ornamentals grower Bernhard Nurseries recently won the 2021 Royal FloraHolland Greenovation Award. While Bram Bernhard sees the prestigious prize as a boost for the company’s geothermal and solar projects, he does not always feel rightly rewarded for helping cut emissions

Bernhard Nurseries is a third-generation cut rose, potted phalaenopsis and bedding plant grower in Flevoland, the Netherlands. The company grows three million phalaenopsis in 12cm pots for the higher end of the market, a wide range of five million bedding and patio plants, plus 25 million stems of ‘Avalanche+’ roses under a combined 25ha of glass.

Run by brothers Bram and Simon Bernhard, a high level of sustainability (and thus a minimal footprint on the environment) is achieved through several operational practices. Integrated pest management systems eliminate the need for chemicals, and solar electricity combined with geothermal energy is used to heat the nursery’s greenhouses, where Elegant phalaenopsis occupy pride of place.

BEING LESS DEPENDENT ON A VOLATILE ENERGY MARKET

The Bernhard brothers started to look into the potential of alternatives to gas ten years ago. “By 2013, we had emerged from the economic crisis and wanted to be less dependent on an energy market influenced by external factors.”

It turned out geothermal energy presented good opportunities in the Flevoland area. So, the Bernhards and their neighbour, bell pepper grower Tas, worked out a plan to establish a geothermal well and started a 50/50 venture, Aardwarmte Combinatie Luttelgeest (ACL). One production well and two reinjection wells (with two reinjection wells, there is less back pressure and less energy needed), drilled to a depth of 1,800 metres, operate together in the setup.

The heat of the Earth increases with depth; a phenomenon described as the geothermal gradient. This upward heat flux varies across the globe but in the Netherlands tends to be around 33°C/ per kilometre. “Assuming an average outside ground temperature of 12°C, we expect the water to be 78°C,” says Bram, who is the spearhead of the project. At the same time, his brother Simon prefers to focus on the technical aspects of crop production.

THE PREREQUISITES FOR A SOLID BUSINESS CASE

The water in the nursery loop is heated to 75°C and arrives first at Bernhard’s site growing potted phalaenopsis, a crop with the highest heat demand. According to Bernhard, the minimal requirement for a solid business case for wells at 2-3km depth is at least 50ha and largely depends on crop type. “We grow orchids requiring much warmth and little lighting, the neighbour’s bell peppers don’t need too much heat and use no lighting. Orchids need around 80cu m natural gas, in turn bell peppers need 30cu m natural gas but account for a significantly greater area of production.”

The hydrothermal system is three-tiered. The production well can operate at 50 or 100% capacity, pumping up either 200cu m or 400cu m per hour. Bram explains, “If we need to go at full throttle, a heat pump increases the capacity. In winter, it is a three-tiered system, in spring and autumn two-tiered, and in summer single-tiered. The project is of course not 100%t climate neutral, because you always need natural gas as backup, for example if the geothermal project is shut down for maintenance. 99% is possible.”

The €30 million heat plant could warm 100 ha greenhouses, with anticipated savings of 25,000,000cu m of natural gas, equivalent to the amount needed to heat around 22,000 homes.

FOR NOW, NO SDE+ SUBSIDY

The cost of geothermal energy tech has gone down in the last decade and is becoming more economically viable for individuals and companies. However, Berhard stresses that geothermal heat only offers growers protection from rocketing gas prices if Government support is secured.

“The Dutch government subsidy under the SDE+, or sustainable energy promotion, scheme is to encourage further wind, solar and geothermal heat projects and to level the difference between conventional heat cost price and the cost price of geothermal heat. The heat from geothermal energy has to compete with heat produced from burning natural gas and it is cheaper to heat a greenhouse with gas.”

The cost of energy was cheap before the Covid-19 pandemic ground the world economy to a standstill. Almost two years on, the situation is dramatically different. Bram elaborates, “Over the past few weeks, the price of one cubic metre of natural gas was between 90 cents and one euro. I would have never foreseen that my gas bill would be at least six times higher than the five-year average. Break-even for geothermal is at a gas price of about 34 to 40 cents per cu m, so I don’t need to explain that we will not be entitled to the SDE subsidy, which is based on the gas price.”

VISION AND STRATEGY ARE DESPERATELY NEEDED

What’s missing in the debate is a long-term strategy from sector bodies such as LTO NL and the Dutch government. Bram Bernhard urges, “We need vision for the ten years ahead when we will still be in need of clean natural gas. All this is discouraging greenhouse growers from making their production more sustainable.” Equally discouraging, Bram says, is ODE (Profit Renewable Energy), a Dutch energy tax in addition to the average energy tax and used for the subsidies with which renewable energy projects are paid. “If the goal is towards no more gas, then you should not increase the tax on electricity.”

Solving the resulting electricity shortage problem is a ‘floatovoltaic’ system in the nurseries’ water retention basin.

Bernhard Nurseries aims for carbon neutrality, meaning radical changes to how the company produces its plants and flowers and consumes energy. “We are fully electrifying our greenhouses. CHP will be put on standby and replaced by geothermal energy, and solving the resulting electricity shortage problem is a ‘floatovoltaic’ system in the nurseries’ water retention basin. This floating solar system resides 50cms atop the stagnant water, incorporating 50,000 solar panels and producing 15 million kW per year. This sum compares to 3,750 households that yearly consume around 4000kW. The plan is to sell our excess power back into the grid in summer while buying electricity in winter, simply because I have no match with my solar: when I need solar to light my crop in winter, the panels are not working.”

Bram freely admits that if you asked him to do the same thing again today, he would need to think twice. “But hey, you came to visit me on a day when the gas price is displaying 96 cents and geothermal is not yet up and running. All kidding aside, becoming climate-neutral will allow us to gain a unique position in the marketplace. The solar panels will provide us with the necessary kilowatts for our nursery and geothermal will make gas redundant. Automation is next on our list, and LED lighting.

A version of this article, written by Ron van der Ploeg, originally appeared in the January 2022 edition of Floraculture International Magazine. ✽