A recent post from MEP Ciarán Cuffe of the Green Party on LinkedIn provided the stimulus for this article. It featured an urban Brussels street scene. Ciarán highlighted the low-key, unobtrusive traffic-calming measures compared to often over-engineered Irish traffic-calming measures. I wholeheartedly agree with Ciarán, but my brief comment drew attention to the miniscule planter space allocated to the 4 trees in the scene. It set me thinking, again, about the whole issue of urban trees, their roots, and a ‘1,000-word’ image.

As a landscape horticulturist I have constantly faced questions about trees – how close to existing mature trees could excavations take place? What size planting hole would be needed in a 1.2m wide car-park ‘island bed’ with concrete-haunched kerbs? My throat would go dry trying to explain the needs and nature of tree roots.

Daily, we fought hand-to-hand for both tree retention and new tree planting; nowadays there is a more receptive audience, albeit thanks to fears about global warming and carbon sequestration. Today I am the one asking questions about how well informed we are for what may be the ‘last stand’ for humanity.

A century ago, Frederick R. Barnard, writing in the journal Printer’s Ink, coined the phrase about images: “One look is worth a thousand words”. 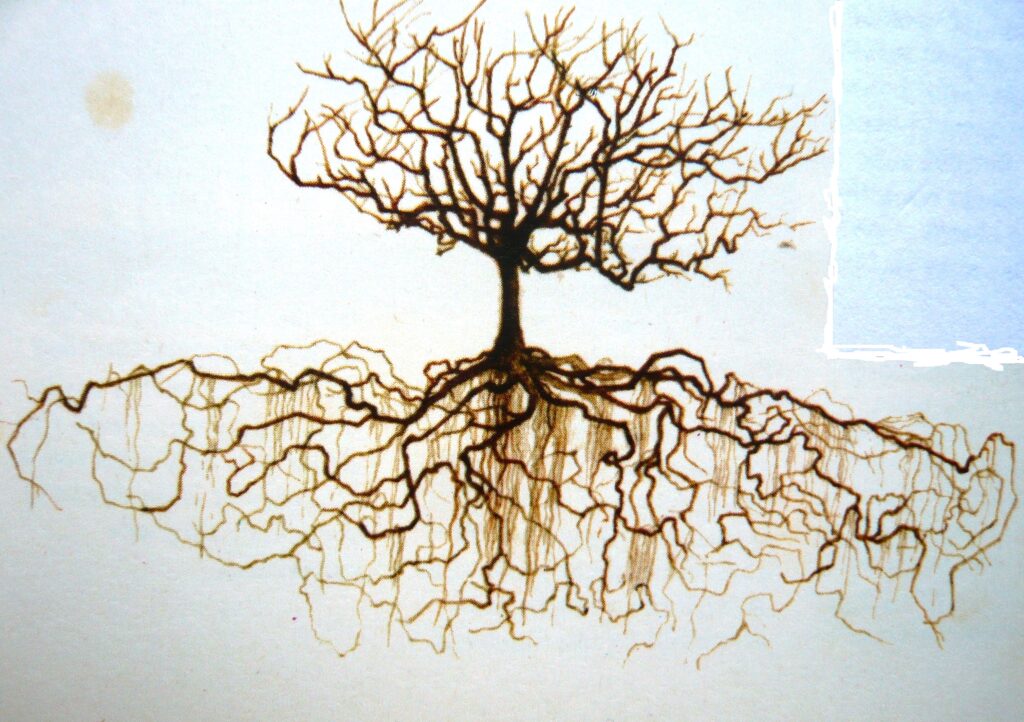 Fifty years ago, in The International Book of Trees (1973) by Hugh Johnson, I spotted a 3-inch x 2-inch image that was worth a thousand words and more for me throughout the years. It featured an apple tree unearthed by the renowned East Malling Research Station in Kent. I used it to explain tree roots to architects and engineers when they wanted to excavate in the vicinity of trees. A similar apple tree, grown on a Malling 26 rootstock, was featured at the East Malling Research Station centenary exhibit at the 2013 Chelsea Flower Show (see main image).

Each of you will come across ‘1,000-word’ images that you will refer to again and again over subsequent years. Readers with any involvement with trees might store the above images.

That tiny image clearly demonstrated that the spread of the tree root system is double the spread of its crown and not an underground mirror-image of the crown, as was the vague understanding of so many construction sector professionals.

I knew where the tree roots were, but the standard rule of thumb (influenced by the mirror-image myth?) for tree surveys was the ‘drip- line’, which only marked the extent of the crown and the summer rainwater cascade! It was recommended that roots should not be damaged within this ‘drip-line’. It was a rough guide that did not take account of different growth habits and site conditions, and as can be seen from the Malling trees, it was well within the actual root area.

The ‘drip-line’ was replaced in the late 1900s by the Root Protection Area. Here, the radius was calculated at 12 times the tree trunk diameter 1.5 ms above ground level; this was incorporated into BS 5837 (2012) – Trees in Relation to Design, Demolition and Construction. That improved the situation for trees with upright crowns, but crucially, in my experience, the radius usually only extended as far as the old ‘drip-line’ limit for wider tree canopies.

Trees don’t do maths, so roots grow in any direction parallel with the soil surface in the top one metre, or less, and typically radiate out a distance equivalent to at least the height of the tree.

There are two excellent articles about tree root zones on the internet that I recommend: one by The Ancient Tree Forum, the other in the Arboricultural Journal 2019, Vol. 41, No. 3, 141–152 by Henry Andrews, Louis Pearson, James McGill, and Jim Mullholland. Both support the view of the root area being much wider than that suggested by BS 5837.

The latter article describes a measurement methodology, The Derived Root-System Radius (DRSR) calculation for the buffer zone, which could result in a radius double that indicated by the BS 5837 RPA.

Both articles refer to the Standing Advice (from the Forestry Commission and Natural England), and the latter article notes that the current recommendation is a minimum 15 m buffer zone for ancient semi-natural woodland. It recommends at least 15 times larger than the diameter of a veteran or ancient tree, or 5 m from the edge of its canopy if that is greater.

I realise that these articles are concerned with specific tree categories, but I suggest that it equally applies to all trees. Tree crowns and roots are in balance and any serious loss of root mass can precipitate the decline and death of mature trees.

You don’t have to be a genius to realise that a tree in decline is not doing much for carbon capture and storage!

Patently the BS 5837 RPA is not intended to protect all the tree roots; it is a convenient compromise between the needs of the tree and the needs of development. The problem is that we all too often find ourselves starting the battle at the RPA line when we can now prove that it should be much further out.

To ensure that we have the maximum urban canopy cover of healthy mature trees we must adopt stronger criteria than BS 5837 – closer to the Standing Advice above – based on at least 15 times the trunk diameter of important retained trees, or 5 m from the edge of their canopy if that is greater. There may have to be some compromises, but the compromise should not be the starting point, as it often is with the current BS 5837. Further compromise solutions should involve far more ‘root bridging’ – tunneling under retained/protected roots.

I would avoid the terms ‘veteran or ancient’ and adopt a classification related to the local census-counted tree population. If the only mature tree in a defined urban landscape circle is a 50-year-old Sycamore, then that is as valuable as a rare 150-year-old tree in Fota Arboretum!

It’s time for all of us to think like a tree and fight for our allies – the abused tree roots toiling in underground bunkers! ✽