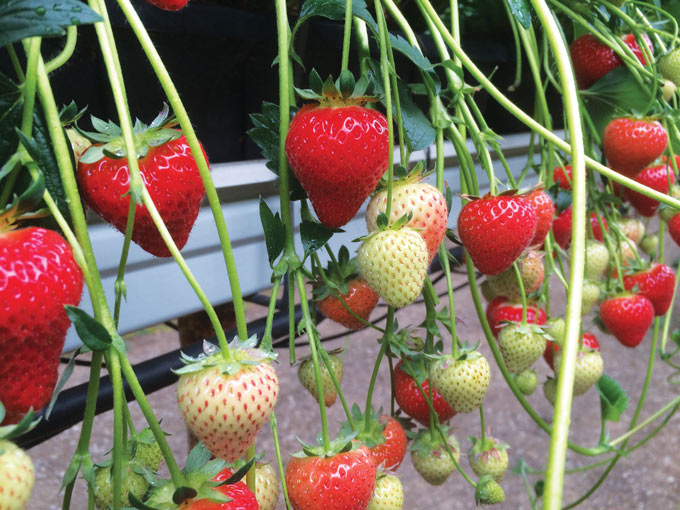 In the first of two articles, Dr. Eamonn Kehoe, Teagasc Soft Fruit Specialist, discusses some of the research findings from the work carried out on ‘Malling Centenary’ over the last few years. The research was conducted in the state-of-the-art research glasshouse unit in Teagasc Ashtown, Dublin.

WHY THIS STRAWBERRY VARIETY?

‘Malling Centenary’ is currently the most popular strawberry variety on the Irish market. It has replaced the Dutch strawberry variety ‘Elsanta’ which was the mainstay of Irish strawberry production for over 40 years. The fruit quality of ‘Malling Centenary’ has been described as superb. Whilst the yields of the variety are lower than those of ‘Elsanta’, the variety compensates for this with increased fruit harvesting speeds and better fruit quality.

‘Malling Centenary’ is categorised as a ‘June-bearing’ strawberry, or in scientific parlance, a ‘short day’ (SD) plant; these plants initiate flower buds in short days. The day length needed for such initiation is not fixed but is modulated by temperature. The lower the temperature, within limits, the fewer the days needed. These ‘June-bearers’ fruit naturally in June, hence the name, and are the most popular varieties among commercial growers. They are the result of decades of breeding for attributes such as productivity, size, flavour, and disease resistance.

Initially, very little was known about this new strawberry variety. The research described here focused primarily on establishing a growing system for the crop grown in a heated glasshouse unit. The first trial focused on developing the optimal nutrition regime for this new variety.

Although the ‘Centenary’ is a SD plant, its flowering characteristics are quite different from those of a typical SD plant. Some of the plant’s genetic makeup includes crosses from the east coast of the United States and these genes may be switched on in certain environmental conditions. In fact, when the variety was first grown here several Irish growers observed an unusual feature of this new variety. When grown over a season in a heated glasshouse it cropped continually, from the spring to the early autumn. This is highly unusual for a ‘June bearing’ (short day) strawberry variety. We observed the same phenomenon in our trial.

High crop yields and good fruit quality, with as few crop inputs as possible, are the goals of successful production systems, saving money for the grower and simultaneously resulting in considerable environmental benefits.

We grew one crop of ‘Malling Centenary’ over two growing seasons. The plants were planted in early 2018 into a heated glasshouse unit. The crop was fed with a feed a low electrical conductivity (EC) of 1.0dSm-1 or with a standard feed with an EC of 1.6dSm-1. The strawberry crop was overwintered in the glasshouse. Once growth began in early 2019 all plants were treated with night break lighting using special light-emitting diode (LED) lights to break crop dormancy. When night break light treatment is not used, both crop yields and strawberry quality are lower. The LED bulbs use only 11 watts of electricity compared to the standard

100-watt incandescent bulbs predominantly used in the industry. The bulbs used in our glasshouse are Signify’s ‘Greenpower’ bulbs. These lights are specifically designed for night break lighting. The lights give the optimum levels of deep red, white and far-red radiation for the strawberry crop.

In the first season, fruit harvesting began on the 26th of April and ended on the 29th of July. This long growing season is a phenomenon when growing ‘Malling Centenary’ using heated glass. The variety includes an everbearing (short-day) variety in its breeding line which may contribute to this long season extension. The yields in the first season were 675g per plant and 635g per plant using the low and high feed respectively. There was no difference in the production of Class 1 fruit quality between the feed levels, with high scores of 88 and 89 percent respectively.

In the second season of production, fruit harvesting started on the 26th of April and continued until the 29th of July. The crop produced 463g and 454g of fruit per plant from the low and high feed treatments respectively. There was no difference in the production of Class 1 fruit between the two feed levels, with each producing over 80 percent.

Over the two growing seasons, both the low and high-fed crops gave a total fruit yield of 1.13kg and 1.08kg respectively. This was an excellent total yield. The Class 1 fruit production was also excellent at 88 and 89 percent respectively for both low and high feeds. The fruit yields and percentage of Class I quality fruit produced demonstrate how productivity and fruit quality can be increased on the farm by choosing this variety. It is apparent that a strawberry grower using the ‘Malling Centenary’ variety can reduce fertiliser and water costs and consequently lessen environmental effects by also reducing water and fertiliser runoff from the crop.

The work on ‘Malling Centenary’ demonstrates that you can achieve a satisfactory yield whilst reducing the nutrient input into the crop, without a detrimental effect on crop yield or fruit quality. An upcoming article will describe the effect of planting dates and density on a 60- day crop of ‘Malling Centenary’. ✽ 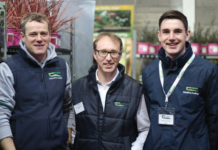 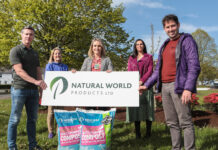