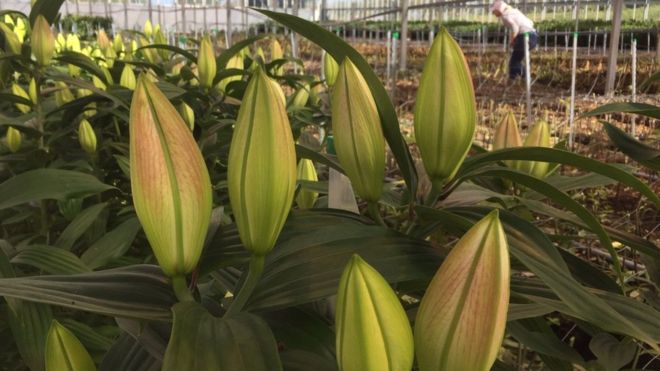 It’s known as the Orchard County, but Armagh is also home to a thriving trade in flowers.

Every year Shane Donnelly grows millions of lilies and scented stock for supply to florists & supermarkets.

But with the coronavirus lockdown orders plummeted.

Supermarkets were concentrating on stocking their shelves with food.

Non-essential items were not even being thought about.

Shane describes it as “a very tricky time” for his company.

Previous investment in cold stores was a life-saver, providing the ability to extend the shelf life of his perishable product. So too was the cool weather.

Heated houses were turned off, slowing growth rates and providing a little more time to work out what to do.

Some stock he gave to a cancer charity so that it could use it to raise funds.

He says his customers, the biggest of which are Asda and Lidl, have been very helpful.

But coronavirus means great uncertainty for his bottom line this year.

He reckons he could have at least 20,000 stems that he simply won’t have a market for.

And as the summer heats up, he won’t be able to hold his plants back and much of the crop could mature at the same time when he won’t have customers for it all.

Horticulture has been as badly affected by the virus as any other sector.

Our soft fruit growers, who would use seasonal migrant labour, could struggle as the crop matures in the coming months.

Restrictions on travel and grounded airlines may mean those people will simply not be there.

Growers hope that students who would normally work in bars and cafes that are shut may be available.

And while it’s some time off, the Armagh Bramley apple harvest will need many workers too. Food has become a globalised commodity.

The convenience and choice we’ve become accustomed to are reliant on air and sea freight and just-in-time delivery.

Shane Donnelly used to grow a whole range of vegetables alongside the flowers on his land near Lough Neagh.

Tomatoes, courgettes, peas and cucumbers were all once part of his offering.

But the need to become ever more competitive on price has meant a narrowing of that range.

Now he concentrates on a single variety of lettuce. He believes coronavirus has shown up the fragility of globalised supply chains.

He describes it as a potential “wake-up call” to society.

The importance of domestic food production and the food security that goes with it has never seemed so important.