This Food Alert Series discusses the potential opportunities and challenges for Irish businesses in the Spanish market after Brexit.

There is much uncertainty around Brexit, with no clear road ahead and multiple scenarios. However, since Boris Johnson took over as Prime Minister, the likelihood of Britain leaving without a deal has risen (Fitch Solutions, 2019)2, (Bord Bia’s London Office Brexit Update: 17th – 23rd August 2019)3. A deal was struck this week, but the DUP, the Conservative Party’s coalition partner, have released a statement that they will not support this deal. Other parties have also criticized the deal including the Scottish National Party, the Labour Party and the Liberal Democrats, making it difficult for the motion to be passed in Parliament (RTÉ.ie, 2019)4. This discussion considers the implications of a no-deal Brexit scenario – where Britain would leave the EU with no deal on October 31st.

A no-deal Brexit would result in trade relations between the EU and Britain being regulated by WTO rules. This would make it much more difficult for Irish agri-food businesses to export into the UK. However, it would also make it harder for UK agri-food companies to export into EU member countries, including Spain. From Friday 1st November (Mercaimpex, 2019)5, agricultural goods would face a levy of 8.1%. On average, dairy products will be taxed at 44.8%, meat at 17.8%, and fish at 11.4%. However, with the question of the border between the UK and the EU on the island of Ireland still unanswered, the dairy and seafood sectors, in particular, would face challenges in terms of supply in the Spanish market.

In 2017 (Instituto Nacional de Estadística, 2018)6, the United Kingdom was the 7th biggest source of imports to Spain. In the same year, the OEC (The Observatory of Economic Complexity, 2019) 7 reported that this accounted for 4.1% of the $333 billion (€301.67 billion) total imports that year. Of the total imports, $740 million (€670.37 million) came from British foodstuffs and $349 million (€316.14 million) came from British animal products. This data has been broken down below, filtered based on the sectors that Bord Bia focuses on (Meat, Dairy, Seafood, Alcohol and PCF). 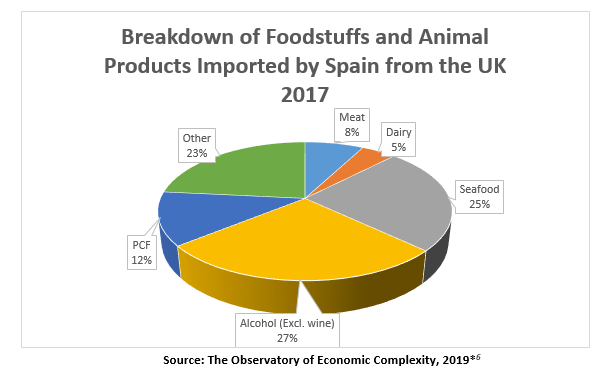 Within the data from the OCE (The Observatory of Economic Complexity, 2019) 6 for 2017 on British animal products and foodstuffs imported into Spain, other information was provided on foodstuffs and animal products outside of Bord Bia’s key priority sectors. This totaled $255,120,000.

Over the course of this 6-part series, the implications for each sector will be analyzed in more detail. 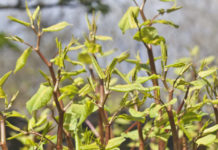 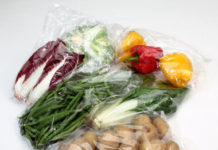