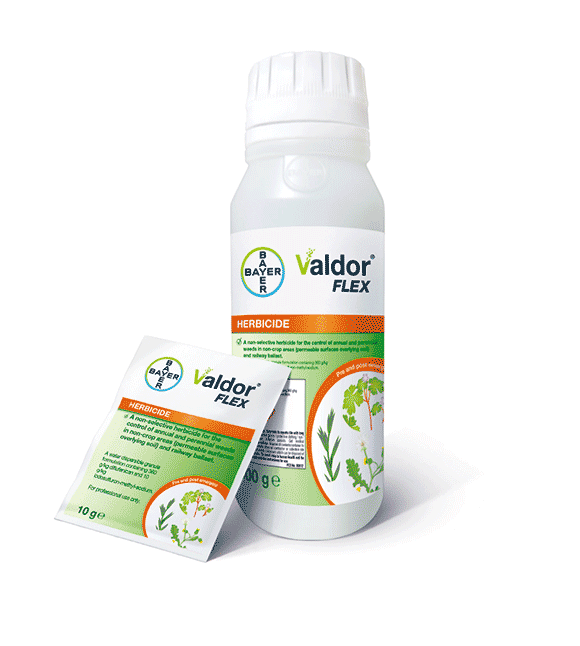 Greg Collins, Bayer national account manager, explains the launch of the broad-spectrum herbicide, Valdor® Flex, comes at the perfect time to support amenity contractors in light of increasing legislation around glyphosate use.

“The product contains two active ingredients with different modes of action, that target a broad spectrum of weeds.

“Valdor® Flex is a pre-emergence herbicide, but if weeds are present it can be applied in a post-emergence mix with glyphosate or a suitable biological alternative, such as pelargonic acid,” says Greg.

He adds that it can also reduce the number of herbicide applications. “Contractors typically make three or four glyphosate applications a year, but Valdor® Flex could cut this by two-thirds or even eradicate its use if mixed with a biological alternative.

“This unique product can be applied between March and June and has a residual affect for up to four months,” he explains.

Greg explains, Valdor® Flex is available to purchase from UniChem and Sprayclear in two convenient pack sizes of 10g and 500g.

The 10g sachets can be mixed with 10 litres of water and will cover 200 m2. For contractors requiring large quantities, the 500g bottle is more cost-effective, but Greg warns that careful mixing is required.

Alan Abel, from Complete Weed Control, put the new herbicide to the test on a heavily weeded gravel site at an international airport.

“In practice, Valdor® Flex worked very effectively. In our trial, we combined it with glyphosate due to the size of the weeds we were controlling. But going forward, due to our confidence in Valdor® Flex we’re keen to use the glyphosate-free option for early weed treatment.”

Alan adds that with herbicide resistance an increasing concern for the amenity sector, it’s great to see new effective products coming on to the market.

For more information on this product visit https://www.environmentalscience.bayer.co.uk/turf-management/products/valdor-flex-ireland or contact the Turf Solutions Team at turfsolutions@bayer.com.