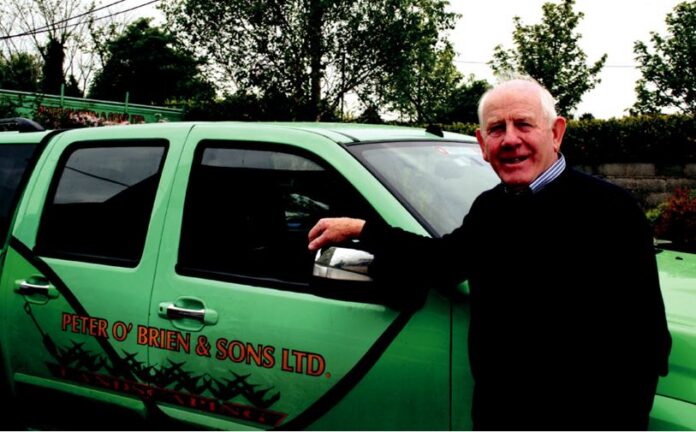 The End of an Era

” Email the interview questions and we’ll go through them over a cup of tea next week.”

replied a buoyant Peter O’Brien Snr in response to my interview request for the winter issue. Sadly, we never did get time for that cuppa. Peter passed on October 26th last, peacefully and surrounded by his loving family.

For those of you who didn’t know him, Peter was the founder of Peter O’Brien and Sons Landscaping LTD, Ireland’s longest established, family-owned landscaping company. Those who knew him, know the enormous contribution he made to the professional development of the commercial landscape sector in Ireland over the last 60 years. Personally, I have known Peter for a number of years and the privilege of working for him for the last three.

While I didn’t get the chance to conduct a formal interview with Peter, I have had opportunities in the past to discuss and record his comments and stories about his early days, his business and his commitment to the sector. I share some of these here with words from a number of leading industry figures who worked and knew him well over the years.

“My father spent his formative years farming the land and was renowned in the area for his ploughing skills,” explained, Peter when I first asked him how he got started. “When we missed out on an opportunity to extend the family farm, I knew I would have to broaden my horizons. Despite my parent’s protests, I decided to pack my bags and create a new life for myself.” Like many of his generation in the 1950s, he found his way to England, working in whatever capacity he could. Before long he secured work on the buses and spent several years happily navigating the streets of Birmingham.

“I worked hard and made a home in England, but Ireland was always calling,” he said.

In 1963, he decided it was time to head back to Ireland, and with his wife Kitty, he set up home and a fledgling landscape company in Artane in North County Dublin. “Ireland was in the midst of a house boom and the new homeowners in Raheny needed lawns. I was able to put the ploughing skills my father thought me to good use preparing and seeding gardens. Kitty worked from home answering calls, doing the accounts and chasing down new business”.

From these modest beginnings, Peter and Kitty grew the business, taking on staff, buying machinery and expanding the range of services. As the business grew, so did the family. As soon as they were able, the children Dermot, Karen, Helen, Mary, and Ciaran all found themselves involved in the day to day operations. “We were all expected to work, no exceptions. Dad was a tough operator with high expectations of us all,” explains Ciaran, who has been a company director and primary shareholder for many years.

With his commitment to quality and integrity, Peter quickly built respect, knowledge and a reputation for getting the job done and done well. This allowed him to diversify into other areas and develop new services. From his first small gardens, he went on to do work for local councils, larger gardens, parks, and sports pitches. The company grew rapidly with men in the field and administration in the company offices. While initially run from the family home, the company quickly outgrew it and the decision was taken to invest in a permanent base in Malahide, where the company is still largely based.

“My dad was first and foremost a family man,” says Ciaran O’Brien. “He had a sincere belief in the importance of traditional family values and in many ways, built his business around them; Truth, honesty, respect, morality and ethics run at our core. He was also a man of faith and charity, and often combined the two with donations and support. He pursued both with no expectation of return and out of a genuine sense of duty and responsibility. He would never see anyone stuck or wanting”.

“There are few people that have had a greater impact on my life,” explains, Peter O’Toole. “I studied with Ciaran in the bots and then went off to Kew. Not long after, Ciaran asked me to come back to work with himself and Peter. That was thirty years ago,” he added.

Peter has been instrumental in the development of the company over the years working shoulder to shoulder with Ciaran and his father. “I have learned so many lessons about life and work from Peter over the years” he continued. “He was committed to people and to operating with integrity. He knew the difference between cost, price and value. He understood that some of the most important things in business aren’t reflected on the balance sheet. He’d often pay more for things from someone he knew, knowing he could get it cheaper elsewhere. He understood the value of relationships and how much more important they are for the long term health and success of a business; and a family. That will always stay with me.”

Peter O’Brien Snr had a motto: From little acorns, mighty oaks grow. And grow they did. From a one-man show, rotovating back gardens in north Dublin, Peter built a thriving, multi award-winning, full service landscape company instilled with traditional family values. Through his commercial activities, involvement with industry associations and commitment to professional development he made an immeasurable contribution to the landscape sector. He will be dearly missed. 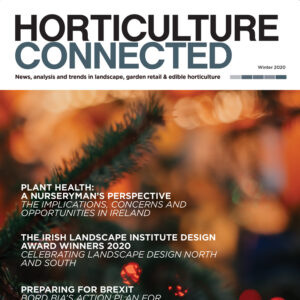